Quick update to Amardeep’s post on the Maoist victory in Nepal last month. Delegates from Nepal’s political parties convened a special assembly yesterday and voted 597 to 4 to abolish the 239-year-old Shah dynasty: 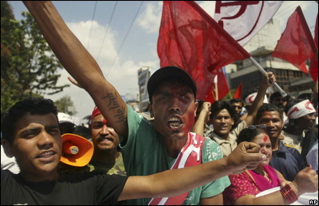 The government has told unpopular King Gyanendra to vacate his pink pagoda-roofed palace in the capital Kathmandu within a fortnight, or be forced out… It has been a dramatic decline and fall for a king once waited upon by thousands of retainers. Many Nepalis revered the monarch in majority-Hindu Nepal as an incarnation of Lord Vishnu, the god of protection.

Now, his portrait has been wiped off bank notes and his name has disappeared from the national anthem. He has been asked to pay his own electricity bills.

Nepalis say much of the mystique of the royal family was destroyed by the 2001 palace massacre in which popular King Birendra and eight other royals were killed by then Crown Prince Dipendra, who then turned a gun on himself. The royal image was further tarnished after Gyanendra fired the government and assumed absolute powers in 2005, only to be humbled by weeks of anti-king protests a year later.

Political parties and Maoists say a new president will step into the king’s place as a head of state after the end of the monarchy. link

And thus the world welcomes its newest republic. The palace is to become a historical museum after the king departs, but no word yet on where the new president will reside. Especially since the new president has not been selected/elected yet:

There is a common assumption that it will be the current prime minister, the wily 84-year-old Girija Prasad Koirala, whose dynastic family is Nepal’s answer to the Gandhis or the Bhuttos…

But Yubaraj Ghimire of Samay weekly newspaper says many in the Nepali Congress party and outside it are fed up with Mr Koirala, whom he describes as “overrated by the international community” and still driven by ambition despite his age. He predicts powerful voices in favour of Bishwanath Upadhyay, a former chief justice, or Ram Raja Prasad Singh, a veteran and militant pro-republican. link

Now that the monarchy has been abolished, no one is certain what comes next. The country remains technically without head of state, its three major political parties have clashed in the past, one of those parties (the Maoist) faces internal factionalism, and the Maoist army remains to be integrated into a Nepalese Army that fought it for almost a decade.

The assembly has two years to create a constitution, but I suspect outside observers will find it difficult to ascertain the country’s new direction for some time. I can’t even get a clear sense of how many delegates are on the assembly since Reuters and Bloomberg pegged it at 564 and the BBC and CNN Asia say 601. I’m running with the latter for now.

Militant pro-Hindu and pro-royal factions appear to be engaging in petty acts of violence, but on the whole, everyday Nepalese appear to be pleased by today’s ouster:

“I think it is good that the king is going,” said taxi driver Niranjan Shrestha, 36. “He hasn’t done anything for the people except amassing money for himself and his family. link