InfoUSA, the Omaha, Nebraska, based data-processing and marketing monolith owned by Vinod Gupta faces the prospect of being delisted from the NASDAQ because the company has not filed its annual reports for the 2007 fiscal year, and again for the period ending March 31. 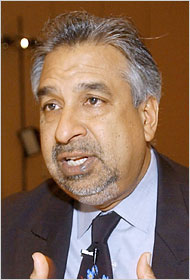 The company’s failure to file is due to ongoing litigation involving its shareholders, which has been stayed until June 30. In 2005, shareholder hedge funds Dolphin Limited Partnership and Dolphin Financial Partners filed suit in a Delaware court alleging that InfoUSA founder and CEO Vinod Gupta had spent corporate funds on personal expenses. link

That discreetly worded phrase, “personal expenses,” refers to the extreeeemly questionable corporate-funded generosity dear Vinod showered on his pals, Bill and Hillary Clinton. Among the allegations:

InfoUSA is also under investigation by the Federal Trade Commission for selling names, addresses and other data on the elderly to known telemarket scammers:

Mr. Gupta’s friendship with (courting of?) the Clintons appears to date to 1995, when he organized one of the first Indian-America fund-raisers for the Clintons, raising over $500,000. Coincidentally or not, he was invited to spend a night in the White House Lincoln Bedroom, the first Indian-American to do so. More on the convoluted mutual back-scratching between Mr. G and the Clintons (Offers of ambassadorships! Appointment to the board of the JFK Performing Arts Center! Boys and girls schools in Uttar Pradesh named his-n-her style after the Clintons!) here.

While the outcome of the lawsuit is still pending and InfoUSA’s current standing in the NASDAQ is precarious, the company rather adroitly plans to rebrand itself as InfoGroup effective June 1, 2008:

A company press release said that the name change was precipitated by the firm’s recent acquisitions of several research companies around the world, including Opinion Research. The release said that these acquisitions â€œprovided the company a significant platform and foothold in the international marketplace.â€ Vin Gupta, founder, chairman and CEO of InfoGroup, said in a statement, â€œThe opportunities are limitless and we are extremely well positioned for a foundation of success overseas, much as we have demonstrated stateside.â€ links