With the Obama vs. Clinton contest in its death throes, I want to make sure we don’t lose sight of the big picture. There is another contest between an accomplished woman and a black man that is also about to come to an unfortunate end. It is the contest between Clinton body woman Huma Abedin and Obama body man Reggie Love (yes, that is his name). 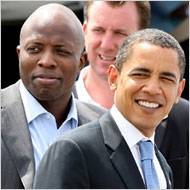 Mr. Love now knows that when it comes to food, Senator Obama “eats pretty much anything, from chicken wings and barbecue and ribs to grilled fish and steamed broccoli.” But when he is campaigning in a small town with limited options, a cheeseburger is always a good bet. (“Cheddar is the cheese of choice,” Mr. Love added.)

He knows that “the boss,” as he calls Mr. Obama, likes MET-Rx chocolate roasted-peanut protein bars and bottles of a hard-to-find organic brew — Black Forest Berry Honest Tea. He keeps a supply of both on hand…

Mr. Love, 26, is Mr. Obama’s body man, the personal aide who shadows the senator and anticipates everything he needs — and everything he does not need. He is not a bodyguard (security is provided by the Secret Service), but rather the ultimate assistant, rarely more than a body length away from the candidate. [Link]

p>Even in a story about Obama’s body man, the Times lets us know that it too is smitten by giving a nod to the underdog:

p>Yeah, that’s right. She is efficient and glamorous in addition to being dreamy. What does Mr. Love have going for him?

Mr. Love had summer try-outs with the Green Bay Packers in 2004 and the Dallas Cowboys in 2005 before being cut.

Which is how, in 2006, after applying for an internship on Capitol Hill, Mr. Love ended up interviewing with Robert Gibbs, Mr. Obama’s communications director, for a position in Mr. Obama’s Senate office. “It’s the only time I’ve ever interviewed somebody whose work experience included the Green Bay Packers and the Dallas Cowboys,” Mr. Gibbs said. [Link]

p>Misogyny rears its ugly head once again. The popular jock is pitted against the female achiever.

p>Speaking of Huma, I read something a few weeks back that sort of disturbed me. A couple of Washington Post columnists were reporting on the White House Correspondents Dinner afterparty and noted the following tidbits: 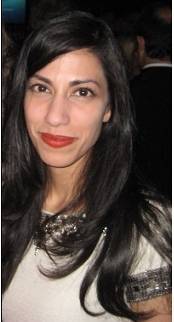 · “Harold & Kumar” co-star Kal Penn closed down the Bloomberg after-party at 3 a.m. with an intense discussion with Salman Rushdie. Dudes!

p>Are you guys thinking what I’m think? Penn ends up at an after-after party with LC AND Huma (after he more than likely smoked up with Rushdie). I bet you that rabid Obama supporter is making a play for Huma, who must be particularly vulnerable right now. I’ll cut you you bastard if our paths should cross. Stick with LC as it will better complement your Hollywood career/lifestyle.

And so we will have to wait longer to see if fate will produce a female American president (or body woman) in our lifetime. Abedin in 2016 I say. Nobody can deny she’d be better than Jindal.

23 thoughts on “The other race: Abedin vs. Love”