The grandaddy of welfare economists, Amartya Sen, chimes in with his view on the causes of the Food Price Kerfuffle in an NYT OpEd. Sen identifies 3 factors behind the global rise in food prices (and no, none of ‘em are “Americans need to go on a diet“) 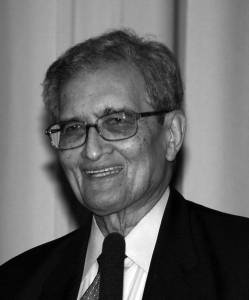 The recent rise in food prices has largely been caused by temporary problems like drought in Australia, Ukraine and elsewhere.

(2) Longer term (new wealth = increased demand; the argument that got dubya in so much trouble with the Indian Press & Politicians) –

The rapid economic expansion in countries like China, India and Vietnam tends to sharply increase the demand for food.

Misdirected government policy plays a part here, too. In 2005, the United States Congress began to require widespread use of ethanol in motor fuels. This law combined with a subsidy for this use has created a flourishing corn market in the United States, but has also diverted agricultural resources from food to fuel. This makes it even harder for the hungry stomachs to compete.

Sen & I generally agree about these causes but differ on the solutions… probably reflecting our different political proclivities. True to his intellectual roots, Sen tends to recommend intervention on the consumption / demand side (“find effective policies to deal with the consequences of extremely asymmetric expansion of the global economy”). That type of attack could be things like food vouchers for the extremely poor, potentially rations for the rich, and other forms of direct welfare, for ex.

By contrast, I tend to focus on the production / supply side. That’s more stuff like finding ways to replicate Brazil’s food production miracle in other countries and bring down prices via the market so even the extremely poor can afford food.

In either case, it’s a good OpEd and makes a bunch of interesting points (his summation of his Nobel Prize winning theory on the Bengal famine, for ex., is particularly concise and readable).