When I was in London last year, there was one West End production that I was determined to seeâ€”Ayub Khan-Dinâ€™s â€œRafta, Raftaâ€ at the National Theatre. Of course, as my luck would have it, the one weekend I was there was when the play was on a hiatus, so I returned stateside without having watched the stage event which was described by the Daily Telegraph as â€œ’an irresistible mixture of bonhomie, bumptiousness and egomaniaâ€¦irresistibly comic.â€ It goes without saying that when “Rafta, Rafta” made its off-Broadway debut at the Acorn Theatre in NYC earlier this month, I was eager to see how it had survived its journey across the Atlantic.

“Rafta, Rafta” is brought to us by Ayub Khan-Din, he who is best known for the brilliant “East is East,” which shone a spotlight on middle class British-Indian family in the 70s. While “East is East” also addressed themes of race and cultural adjustmentâ€”i.e. political issues outside the home, “Rafta Rafta” is much more of a comedy and drama about domestic politics.

Based on Bill Naughtonâ€™s 1963 play “All in Good Time,” “Rafta, Rafta” (directed by Scott Elliot who also directed the 1999 production of “East is East” and the original “Avenue Q” production at The New Group) is a comic yet poignant look at the challenges of extended family living in contemporary UK. [read the rest of this review below the fold] The Subjects: The Dutts, a contemporary blue collar family living in Bolton, a suburb of Manchester.

The Situation: After their wedding, Atul (Manish Dayal), the eldest son, and his new bride Vina (Reshma Shetty) move into the home of his parents, the attention-seeking, domineering yet well-intentioned father Eeshwar (Ranjit Chowdhry) and caustic, charming Lopa (Sakina Jaffrey). In cramped quarters which they also share with an intrusive younger brother Jai Dutt (Satya Bhabha) and which is regularly frequented by Atulâ€™s boss Jivaj Bhatt (Sean T. Krishnan) and his British wife Molly (Alison Wright), as well as Vinaâ€™s parents Lata Patel (Sarita Choudhry of Mississippi Masala fame) and Laxman (Alok Tewari), Atul and Vina struggle with their inability to consummate their marriage. Atul has a further bone to contend with: his troubled relationship with his father. In no time, what started out as Atul and Vina’s personal issue becomes everybodyâ€™s problem to solve.

The Timeframe: The play begins on Autl and Vinaâ€™s wedding night and ends six weeks later.

The Result: An entertaining, intergenerational sitcom (parts of it reminded me of the show â€œMarried with Childrenâ€) that touches on deeper issues without always going deep enough.

Anyone who has grown up in the intricate network of a large Indian family has experienced the feeling of realizing that it doesnâ€™t take much for a secret to unravel and for â€œnewsâ€ to spread. No topic is off-limits when it comes to preserving the family, Ayub-Din contends.

One of my favorite scenes is the one where the two parents have a living room conference where they try to come up with a solution for the young coupleâ€™s bedroom issuesâ€”Lata explains to the rest of the group, â€œIT (tilts her head up towards the coupleâ€™s bedroom), IT (additional emphasis) hasnâ€™t happened yet.â€ (Sarita Choudhry’s performance as an “aunty” versus as the young protagonist took a bit getting used to — I have always so identified her with her MM days, but she really pulled it off and after a while, I stopped thinking about her as anything else but Lata, the mother with many regrets.)

What Ayub-Din alludes to but never fully explores are other questions of intimacy and relationships. For example, when Lopa and Eeshwar went on their honeymoon 30+ years ago, we discover that his best friend went along with them. Thatâ€”and the subsequent departure of his friend because of Lopaâ€™s innocent mischievous behaviorâ€”remains a big sore point in their marriage. Thereâ€™s the Freudian subplot as well. Vina and her fatherâ€™s relationship has always been so close that her mother Lata has long felt like an outsider in her own family. The Electra complex? Then thereâ€™s the brother-in-law whose constant flirting with Vina seems innocent enough, but canâ€™t help but make you wonder whether he has a crush on her. And, of course, thereâ€™s the close friendship Atul has with his friend Etash (Utkarsh Ambudkar) and especially the scene where the two of them enact a song from (I think) Pakeezah. Thereâ€™s a question that comes up about their relationship as well. And, of course, Atul and Eeshwarâ€™s relationship is rooted in the Oedipal complex.

All these themes largely go unanswered, but maybe thatâ€™s the pointâ€”that relationships are not so flat-faceted and that years of misgivings and misunderstandings can accumulate. Juxtaposing the marital problems of two older couples alongside the ones of a newly married takes this drama to a striking new level.

I have not read Bill Naughtonâ€™s “All in Good Time,” (which was later made into a film “The Family Way”) but from the various archival reviews that exist online, it seems like this was a pretty close adaptation.

In Aseem Chabraâ€™s profile of Ayub Khan-Din at rediff, he writes:

Khan-Din discovered The Family Way at a Bafta screening and later realised that its original source was the Naughton play. He immediately sensed that it could be adapted into an Asian play. “It translated so easily, it was amazing,” he says. Rafta, Rafta is set in present day England and it reflects the economic plight of all working class families. “Everyone is on the same boat now, given the economic situation. Most young people and couples in England feel that they can’t afford to buy property because you have to line-up 25 to 30 percent of the mortgage for down payment. So it’s becoming normal that they carry on living in the family house, with all the problems — the frustrations and the anxiety of still living in the house with their parents.” [article]

The cultural transplantation works, especially when it weaves in themes of immigration, a make-you-bop-in-your-seat soundtrack by DJ Rekha, and clever quips such as:

Atul: I donâ€™t think whiskey agrees with me. Eeshwar: Iâ€™m not asking you to have a conversation with it.

Though the first half of the play drags a bit, the tempo picks up after intermission as tempers flare, passions ignite, and emotions come to a head. Slowly, slowly, “Rafta, Rafta” grew on me.

At the end of the day, though the British accents were pretty authentic (thanks to dialect coach Stephen Gabis), I couldnâ€™t help but wonder how different the NY production is from the original National Theatre version. While the parents leave the strongest impression in the New Groupâ€™s production, the young couple comes off as whiny and somewhat weakâ€”Iâ€™m still trying to figure out whether thatâ€™s because theyâ€™re so overpowered by stage presence of the actors who played their parents or whether they just have some way to travel in terms of their own execution of their roles.

I also was intrigued at the difference in the synopsis provided by the UK and US productions.

The wedding feast is over and his father’s dancing the bhangra, but the groom himself is busy on the net. and when it’s time for bed, he’s so woefully inhibited by the proximity of his parents, let alone his brother’s childish pranks, that his beautiful virgin bride remains just that. Six weeks later, the whole family start to panic.

After their wedding feast, two nervous newlyweds are ready for some privacy, but the groom’s father doesn’t want the party to end and his brother won’t let them be. Before long, the groom and his new bride begin to realize that having a honeymoon in his parents’ house is not the ideal recipe for romance. Rafta, Rafta… is Ayub Khan-Din’s comic look at the generational divide on sex and marriage.

And, here are the posters of the two productions. Night and day, if you ask me. One emphasizes the family drama element. The other straightforwardly pitches the play as a riff on sex and marriage. 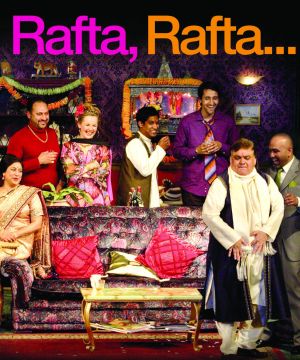 Regardless of the variations and the ways in which the NY production could have been improved, I have to agree with ultrabrown’s manish who says “quickly, quickly: see ‘Rafta, Rafta …” and TheaterMania’s Dan Bacalzo who says, “book your tickets, quickly, quickly.” After all, it’s not often enough that a play about desi family life comes to a theatre near you.

17 thoughts on “Slowly, Slowly, Rafta, Rafta Grows On You”