Our story begins in the Illinois [State] Senate 5th District where the incumbent, African American Rickey Hendon has established a “colorful” reputation over the years: 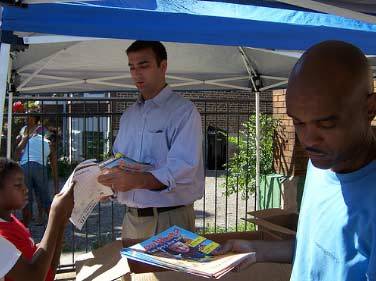 For the last 15 years, Sen. Rickey Hendon has been known around the Statehouse for a style that’s streetwise but controversial, cultivating the larger-than-life persona of a filmmaker-turned-politico whose bravado often overshadows even his best intentions.

Now, as the West Side lawmaker who’s proud of his “Hollywood” nickname seeks to extend his tenure in the state Senate, two challengers are trying to turn that flashiness against him as Hendon faces his first serious re-election campaign.

Jonathan Bedi and AmySue Mertens are relative newcomers to Chicago politics, but both are honing in on what they see as Hendon’s big weaknesses: his conduct toward women, his promotion of a major casino gambling expansion over what they say is the district’s long-term economic health, and the assertion that Hendon is coasting. [Link]

One of the two challengers, Jonathan Bedi, has an Indian American heritage:

Jonathan Bedi is uniquely qualified to represent the diverse and dynamic 5th District in the Illinois Senate. Jonathan’s father is an immigrant from India, and his mother is Irish-American. Jonathan is proud of his multi-racial, multi-ethnic background. Jonathan has a long history of public service–serving as a public school teacher and community activist. Jonathan is an attorney who provided legal counsel to urban non-profit organizations and who recently served as assistant corporate counsel to one of Chicago’s leading manufacturing companies. [Link]

p>As you may have guessed, the 5th is heavily African American and Hendon probably doesn’t take too kindly to someone like Bedi wooing his constituents. Clout Street, the Chicago Tribune blog, featured a story last week that captures some of the racial tensions of this contest:

“I’m not going to yell and strut and call people names,” Bedi said. “You don’t need to be a woman to be offended by his treatment of women.”

Hendon and Bedi both complain that race is being made an issue, too. Hendon is criticizing Bedi, who is Indian-American, for trying to come off as “black” in some neighborhoods and “white” in others.

Bedi decries defacement of several campaign billboards where vandals painted the words “Uncle Tom” under an image of Bedi shaking hands with Congressman Bobby Rush, his most prominent backer. [Link]

Bedi has a pretty impressive resume

as a teacher and community organizer. However, it will be an uphill battle to unseat Hendon, especially since there are two challengers splitting the vote. Still, Jindal demonstrated in Louisiana that an Indian American can successfully compete for the African American vote. If you are from Illinois and have any insight on this race then please leave us a comment.