On my now-defunct personal blog I used to give some of my blog entries their own soundtrack. You know, music one should play in the background to make reading the post more enjoyable. Before continuing on to read the rest of this post, please hit play on the Geto Boys: 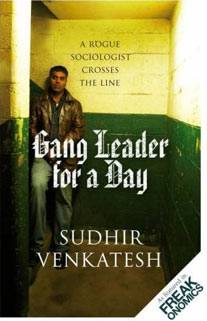 His previous book was titled, Off the Books: The Underground Economy of the Urban Poor. Gang Leader for a Day chronicles Venkatesh’s time spent hanging in the projects while pretending to be the chief biographer of a Chicago-land crack dealer named JT:

“Gang Leader for a Day” provides an often compelling, if amateurishly written, account of his quest. Under the protection of J.T., a middle manager in a citywide crack-dealing operation, Venkatesh sets himself up at the Robert Taylor Homes, one of the nation’s largest and poorest housing projects. Over seven years of study, he hangs out with gangsters, witnesses drive-bys and – remarkably – even participates in the beating of a man accused of abusing his girlfriend. Venkatesh’s research provides groundbreaking insights into the corporate-like hierarchy of drug dealers. It reveals the intricate shadow economy of the high-rise hustlers and the ways legitimate neighborhood businesses support it. And, most effectively, it offers a heartbreaking glimpse of how residents struggle just to survive in a place where even emergency vehicles fear to venture. [Link]

p>Sounds like Venkatesh really got into character. If he was a cop and not a sociologist I might have titled this post “Dhiren Brasco.” In fact, some of the reviewers openly wonder if Venkatesh may have gotten too close to his “subjects:”

I found this a difficult review to write. The book is very interesting and Venkatesh is one of the world’s best and leading social scientists (and I don’t say that lightly). Still, I thought his book was…how can I put it….somewhat evil, if I may call upon that old-fashioned concept. The book required him to work with, and often encourage, a vicious gang leader for up to six years. [via Marginal Revolution]

p>You know what I’m thinking? This would actually make a kick-ass movie as long as they let Venkatesh’s character be played by a South Asian actor. It would make for a really original screenplay I think. For those of you wanting a glimpse into the flow of the book, the NYTimes and Wall Street Journal have been publishing long excerpts:

After nearly three years of hanging out with J.T., I began talking to several of my professors about my dissertation topic. As it turned out, they weren’t as enthusiastic as I was about an in-depth study of the Black Kings crack gang and their compelling leader. They were more interested in the standard sociological issues in the community: entrenched poverty, domestic violence, the prevalence of guns, residents’ charged relations with the government – and, to a lesser extent, how the community dealt with the gang.

If I explored these subjects well, my professors said, I could explain how the Robert Taylor tenants really behaved, rather than simply arguing that they didn’t act like middle-class people.

Bill Wilson in particular was adamant that I adopt a wider lens on the gang and its role in Robert Taylor. Because sociology had such a strong tradition of “community studies,” he wanted me to write the definitive report on everyday life in high-rise housing projects.

He also said he’s started worrying about my safety in the projects. By this point, I had taken up golf as a way to spend more time with Wilson, an avid golfer. “I’m having nightmares, Sudhir,” he said once in the middle of the fairway, staring out blankly. “You’re worrying me, and I really want you to think about spending some time with others.” He drifted off, never instructing me about which “others” I should be observing, but I knew this was code for anyone besides the gang. [Link]

If any of you have already read this then let us know what you think.

44 thoughts on “Damn It Feels Good To Be A Gangsta’”