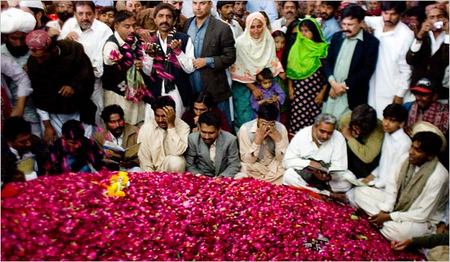 I Can’t Stand It I Know You Planned It
I’m Gonna Set It Straight, This Watergate…
Oh My, It’s A Mirage
I’m Tellin’ Y’all It’s Sabotage [bb]

To me, the “sunroof theory” sounded contrived; it was insult on top of murder. A lot of us aren’t buying what Pakistan is selling, with regards to the assassination of Benazir. The NYT has more (thanks, Camille):

New details of Benazir Bhuttoâ€™s final moments, including indications that her doctors felt pressured to conform to government accounts of her death, fueled the arguments over her assassination on Sunday and added to the pressure on Pakistanâ€™s leaders to accept an international inquiry.

Athar Minallah, a board member of the hospital where Ms. Bhutto was treated, released her medical report along with an open letter showing that her doctors wanted to distance themselves from the government theory that Ms. Bhutto had died by hitting her head on a lever of her carâ€™s sunroof during the attack.

In his letter, Mr. Minallah, who is also a prominent lawyer, said the doctors believed that an autopsy was needed to provide the answers to how she actually died. Their request for one last Thursday was denied by the local police chief.

Two other obstacles to an autopsy: objections on religious grounds and the slain woman’s husband. Asif Ali Zardari refused to hand over his wife’s remains to a government he cannot trust:

On Sunday, Ms. Bhuttoâ€™s husband, Mr. Zardari, said he received a call from the Punjab home secretary on Thursday evening with a request for his permission for a post-mortem examination. He said he refused because he did not trust the government investigation to prove the cause of her death.

In ordinary circumstances, an autopsy runs counter to Islamic belief that a body should not be tampered with and should be buried as quickly as possible. But several Pakistanis said that in certain classes of Muslim society, particularly the better educated and more urban people, autopsies were not ruled out on religious grounds…

An international inquiry on Ms. Bhuttoâ€™s death could not be carried out without an exhumation, a difficult decision in a Muslim country, Mr. Latif said…

But Ms. Bhuttoâ€™s supporters noted that the family and the party were so furious at President Musharraf, whom many of them blame for her death, that it was unlikely the Bhuttos would trust an exhumation that involved the government.

Requests for an International Inquiry (see: Rafik Hariri) are increasing, thanks to the Pakistani government’s feeble insistence that Bhutto was not shot. So much for their CYA strategy. It’s far better for the government to put forth this sunroof-based nonsense instead of owning up to the grim fact that security for the most popular politician in Pakistan was pathetic.

The governmentâ€™s explanation, that Ms. Bhutto died after hitting her head as she ducked from the gunfire or was tossed by the force of the suicide blast, has been greeted with disbelief by her supporters, ordinary Pakistanis and medical experts. While some of the mystery could be cleared up by exhuming the body, it is not clear whether Ms. Bhuttoâ€™s family would give permission, such is their distrust of the government.

Bless Dr. Khan, for daring to speak the truth:

Mr. Minallah distributed the medical report with his open letter to the Pakistani news media and The New York Times. He said the doctor who wrote the report, Mohammad Mussadiq Khan, the principal professor of surgery at the Rawalpindi General Hospital, told him on the night of Ms. Bhuttoâ€™s death that she had died of a bullet wound.

Dr. Khan declined through Mr. Minallah to speak with a reporter on the grounds that he was an employee of a government hospital and was fearful of government reprisals if he did not support its version of events.

A government official agreed with Dr. Khan, until the truth was massaged in to excuses which inspired incredulity:

On the night Ms. Bhutto was assassinated, an unidentified Interior Ministry spokesman was quoted by the official Pakistani news agency as saying that she had died of a â€œbullet wound in the neck by a suicide bomber.â€

The next day, Brig. Javed Iqbal Cheema, the Interior Ministry spokesman, recast that version of events, saying at a news conference that Ms. Bhutto died of a wound sustained when she hit her head on a lever attached to the sun roof of the vehicle as she ducked a bullet and was thrown about by the force of the blast. â€œThree shots were fired but they missed her,â€ Brigadier Cheema said. â€œThen there was an explosion.â€

Brigadier Cheema must be a fantastic poker player:

Brigadier Cheema made clear, however, that an international inquiry was not in the cards. â€œAt this point in time we are quite confident with the kind of progress that is going on with our inquiries,â€ he said Sunday.

Foreign experts did not have the expertise, he said, to deal with the peculiarities of tribal areas that are the base of the nationâ€™s terrorist activities. â€œThis is not just an ordinary criminal case where you only need forensic expert,â€ he said. â€œWe understand the dynamics better.â€