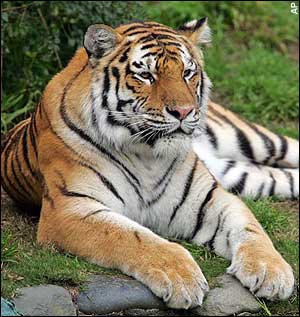 Ever since a rare Siberian tiger named Tatiana escaped its enclosure at the San Francisco Zoo (my first zoo!) and mauled two brothers after killing a third man, news sites have listed the story in their various “top ten” boxes, for most emailed, most popular and most blogged. Who knew there was a Sepia angle to this captivating, contradiction-filled tale? An anonymous tipster did, and they just rang up the mutiny; it turns out the two survivors are desi.

The big cat exhibit at the San Francisco Zoo was cordoned off as a crime scene Wednesday as investigators tried to determine whether a 300-pound Siberian tiger that killed a visitor escaped from its high-walled pen on its own or got help from someone, inadvertent or otherwise.

Police shot the animal to death after a Christmas Day rampage that began when the tiger escaped from an enclosure surrounded by what zoo officials said are an 18-foot wall and a 20-foot moat. Two other visitors were severely mauled…

One zoo official insisted the tiger did not get out through an open door and must have climbed or leaped out. But Jack Hanna, former director of the Columbus Zoo and a frequent guest on TV, said such a leap would be an unbelievable feat, and “virtually impossible.”

Instead, he speculated that visitors might have been fooling around and might have taunted the animal and perhaps even helped it get out by, say, putting a board in the moat. [KTVU]

Tatiana is the same tiger who attacked a zookeeper almost exactly a year ago, during a public feeding. In that situation, the Zoo was found to be at fault, not the tiger, which is why she wasn’t put down. As many have pointed out on message boards and in news articles, “she was just acting like a tiger”. In this latest, deadly attack, some have asked why an animal which is extremely endangered wasn’t tranquilized instead of killed. The zoo had a team which was capable of that, but the police responded first and did what they felt they had to:

The body of Carlos Sousa Jr, 17, was found with a slashed throat near the exhibit.

The other two victims, brothers age 19 and 23, who accompanied Mr Sousa to the zoo, were said to be present when the tiger escaped.

It is thought they fled, leaving a trail of blood which the tiger followed…

The four-year-old cat, Tatiana, attacked one of the brothers before police were able to distract the animal and shoot it dead. [Telegraph]

There has been much conjecture about whether a board was lowered to help the tiger (!), whether they dangled body parts over the enclosure to tease it, and whether blood and a shoe were found inside the tiger’s stomping grounds. Finally, there are a few answers:

New information about the SF Zoo tiger attack has been released by police chief Heather Fong. Based on information gathered from the two survivors, brothers Paul Dhaliwal and Kulbir Dhaliwal, Carlos Sousa Jr. actually saved one of them from being killed. Apparently, when Tatiana originally went after one of the brothers, Sousa courageously tried to draw her attention away from his friend, which worked (obvi).

Predictably, they are in the process of comparing the print with the victims’ shoes. Ek other problem/development:

The wall of a moat that surrounds the San Francisco Zoo’s tiger enclosure is far shorter than officials thought and also below national standards, authorities said today. [SFGate]

Well, that potentially answers how a tiger miraculously jumped out, doesn’t it? In case you missed it the first time, actual desi names of the victims, next:

Zoo officials have gone back and forth on the grotto’s measurements since a 350-pound tiger escaped on Christmas Day, killing 17-year-old Carlos Sousa Jr. and seriously injuring two of his friends. The survivors were identified by relatives and public records as brothers Paul Dhaliwal, 19, and Kulbir Dhaliwal, 23. The three young men were from San Jose.

Earlier this week, zoo officials said the moat’s wall was at least 20 feet tall. Today, they said it was little over 12 feet. Since the investigation began Tuesday, officials have given at least five different measurements for the enclosure, which is surrounded by a moat, two walls on either side of the moat, a small patch of grass and then another waist-high fence. Experts say that the depth of the moat and height of the walls could have a large impact on the animal’s ability to escape the enclosure. [SFGate]

Golly, you think? It turns out that the wall is four feet lower than what experts recommend for such enclosures.

The confusion over the grotto’s size is only the latest headache for investigators looking into the attack, which happened shortly after the zoo’s 5 p.m. closing time. The zoo has no video cameras that watch over the animals, making it difficult to piece together how Tatiana, a Siberian tiger, escaped. And sources close to the investigation tell The Chronicle that the surviving brothers have not been entirely forthcoming during interviews with police. [SFGate]

If I had just been mauled by a tiger which killed one of my closest friends, I might be a bit quiet, too. I’m just saying. The Dhaliwal boys are lucky:

Doctors at San Francisco General Hospital said the brothers are recovering but will have to remain hospitalized for several more days. Chief of Surgery Dr. William Schecter said he was optimistic they would make a full recovery, although there still is a risk of infection.

“They should be able to walk out of here (when they are releasd),” he said. [SFGate]

174 thoughts on “Siberian Tiger Escapes SF Zoo, Does What Tigers Do”