Bangladesh is being hit with a Category 4 cyclone/hurricane right now, with winds up to 150 miles an hour: 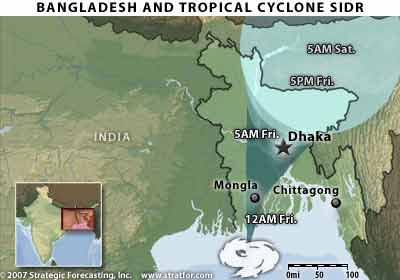 Sidr, a Category 4 hurricane with wind velocity of 135 knots and a heading due north, is on a trajectory that will envelop the heavily populated southern coast before it moves on toward the capital, Dhaka. It is expected to make landfall sometime around midnight local time Nov. 16. Waters in the rivers flowing into the Bay of Bengal along parts of the southern coast already are rising to critical levels. Some 10 million of the country’s 140 inhabitants live along this coast.

The vast majority of the population lives in the broad Ganges Delta, which sits at about 1 meter above sea level. The storm surge is likely to inundate everything within miles of the coast — and the subsequent flooding is likely to be of biblical proportions. (link; subscription required)

Unlike, say, the Tsunami of 2004, there was some advanced warning that this thing was coming; the BBC reports that hundreds of thousands of people living along the shore have been evacuated. Have the preparations been sufficient to fend off major loss of life? I hope so.

If you come across any current news links or updates from Bangladeshi blogs regarding the impact of Cyclone Sidr (which will be continuing over the next day or two as the storm moves inland), please post them in the comments.