The debut novel by Nikita Lalwani, Gifted, makes for quite enjoyable reading. It’s about an Indian girl’s coming of age in Cardiff, Wales, as a math prodigy pushed and prodded by an overly controlling father. 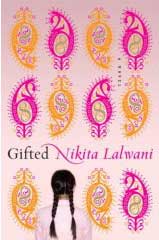 The father’s obsession with having his daughter achieve a very rigid kind of academic greatness should ring a bell with second gen/ABD readers, especially given the apparent desi fascination with things like Spelling Bees (often discussed here at Sepia Mutiny) and World Records. For most middle class desi kids growing up in the west, childhood is often (whether you like it or not) all about “studies” — and Lalwani’s book shows a case of that parental obsession taken to an extreme.

That said, Lalwani’s Rumi (short for Rumika) is in fact genuinely interested in math and numbers from an early age, and Lalwani does a good job of taking us into her head without drowning the reader in math problems. Though I’m not particularly mathematically inclined myself, I do remember there being a certain luminosity to math problems as a child/teenager — something beautiful in algebraic abstractions, or the spiraling concept of infinity in calculus. (Unfortunately for me, I tended to be more enthusiastic about the aesthetics of the math than in actually solving the problems at hand…)

Here’s a short passage from early on in Gifted, where Rumi (age 8 at the time) is chatting with her relations while on a trip to India. They are discussing real-life math prodigy, Shakuntala Devi, who was able to multiply two thirteen digit numbers in her head:

Rumi and Jaggi Bhaiya talk about world records, in particular about Shakuntala Devi, the maths genius who multiplied two thirteen digit numbers in twenty-eight seconds the year before. Rumi has seen Shakuntala Devi on TV, her kindly smile gracing the airwaves like the most favorite auntie you can imagine, big red bindi shining out from the center of her forehead with the super-force of blood. Rumi has a funny feeling when she sees Shakuntala Devi on the screen. It is as though she is related to her. Or something. Even her mum and dad are charged and excited when they see her on the box, thrilled by the contradictions of cotton sari, center parting, blond hair-sprayed host and acrobatic maths.

‘But why did they treat her like that? In itself, it is proof of the superiority complex that the West has over us,’ Jaggi Bhaiya is saying.

‘What is superiority complex?’ Rumi asks.

‘When a culture thinks they are better than us, that we are dirty, cheating scoundrels. That is why they insulted Shakuntala Devi in this way. You cannot deny it!’

He is referring to the text added next to the entry in The Guinness Book of Records. Rumi knows the words, having Jaggi recite them and having read them in her own edition: ‘Some experts on calculating prodigies refuse to give credence to the above–largely on the grounds that it is so vastly superior to the calculating feats of any other invigilated prodigy.’

Gifted is somewhat different from other Brit-Asian fiction by writers like Hanif Kureishi, in that the social context isn’t especially politicized. In Kureishi’s Buddha of Suburbia and My Beautiful Landerette, the central subject is the tension about race and identity — with the rise of the National Front on the one hand, and the emergence of the racially self-conscious British Black Arts Movement and the Southall Black Sisters on the other.

Though Gifted is also set in the 1980s, politics and race aren’t really defining issues. Lalwani’s characters are in a more “mainstream” context–relatively isolated from the trials and tribulations of the immigrant South Asian community–and the story is really about the internal dynamics of a single, deeply dysfunctional nuclear family. If anything, politics enters in obliquely in passages like the one above, where the question is really whether and how respect is given by the world to the “gifted” Indians. Like Jaggi Bhaiya, Rumi’s father smolders with a simultaneous pride and insecurity about his image as a middle-class Indian in British society, and his neuroses are partly what drive him to treat his daughter as he does.

I tend to suspect that this book will be slightly more popular with women than with men, though it is (thankfully) a far cry from those deeply irritating Chitra Divakaruni type books, where the goal is for the desi woman to “find herself,” usually after extricating herself from a bad marriage with a bad desi man. Dating and boys do play a role in Gifted, but again, the story is really about Rumi’s fraught relationship with her father and mother, and all those familiar clichés of 1st/2nd gen Indian fiction (i.e., involving arranged marriage) are fortunately absent.