I saw the headline yesterday on Drudge and I couldn’t believe it: “60 Injured in ‘INDIAN IDOL’ Protests…” At first I rolled my eyes thinking that maybe a fan favorite got booted off and the viewers decided to riot in their displeasure. “Only in India” I thought. Opening the link however, I discovered there was more to this story: 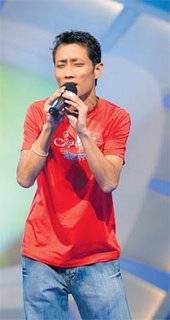 More than 60 people were injured and dozens of vehicles set ablaze in eastern India when an angry mob demonstrated after a radio host made derogatory comments about the winner of the popular television show “Indian Idol,” officials said Saturday.

The violence broke out Friday when supporters of Prashant Tamang, the recent winner of the TV singing competition, took to the streets of Siliguri, a town in the eastern state of West Bengal, to protest what they perceived as a radio show host’s ethnic slur against Tamang, said state police official R.J.S. Nalwa. Tamang is an Indian citizen of Nepalese origin.

The protesters apparently blocked a road and refused to let an ambulance carrying a patient pass, which led to clashes between Tamang’s supporters and a group accompanying the ambulance, said Nalwa. [Link]

p>Naturally, I wanted to know the contents and context of the ethnic slur uttered by the DJ. Last night I checked about a half dozen news stories and not one of them bothered to report on this crucial fact. Is the Indian media really that inept or do they think that reporting the text of the actual slur would cause more violence? I had to go to a blog entry linked to our News Tab to get to the bottom of this mystery [via BPO Tiger]:

“Aaaj Prashant Tamang ‘Nepali ladka from Darjeeling’ [Today Prashant Tamang, Nepali boy from Darjeeling] has become Indian Idol [laughs sarcastically] and we have a [cricket] match tonight so we need to guard our house / malls / restaurants by ourselves as there will be no Nepali people to guard these place and whole night we need to say Jagtay Raho [stay awake].” The RJ also added that all the Footpath Momo shops will remain closed as Nepali guy has become Indian Idol. [Link]

p>I’m not going to even pretend I have a clue about all the ethnic stereotypes in India. I know us gujus are supposed to be cheap and my mom always tells me South Indians are smart because they eat fish

That is basically where my knowledge of Indian stereotypes ends. Now that I have a Nepali sister-in-law though, this particular stereotype is something I wanted to understand better.

My question is how dares Nitin insulting Gorkha/Nepali community like this. This is not a question of whether someone is having sense of humor or not. Will he dare to poke joke on a Sikh’s mile of fabric as a nappy? Or Mahatma Gandhi as gas station attendant or gay? Or asking the Jat community in Delhi why they are so abusive to their women, why they kill girl child, why for marriage they have to bring girls from different states like North East? Will he dare to poke fun on Islam?

I received many a calls from my Nepali friends who work in Delhi BPOs. Nepalis residing in Delhi and working in call centers are planning to take the issue further and they will walk a peaceful protest on either Saturday or Sunday wearing black badge. [Link]

p>Prashant’s backstory is interesting in itself:

When he decided to try his luck at the Indian Idol reality show, winner Prashant Tamang probably did not dream that he would make it to the top.

Even if he did imagine that, the 24-year-old from Tungsung village in Darjeeling district could have never thought, even in his wildest dreams, that for many in Nepal his win would become a symbol of political victory over their southern neighbour India, frequently regarded as an arm-twisting bully.

For nearly two months, Nepal agonised over Indian Idol while its own contest Nepali Tara went ignored. Indeed, the Nepalese contest had to change its timing since no one watched it while it clashed with Idol.

Why would a nation ignore its own talents and devote its energies to promoting a singer whose ancestors originated from Nepal?

The answer is because, for many Nepalese, Darjeeling is still part of Nepal. [Link]

p>Maybe RJ Nitin also feels that Prashant isn’t really Indian, or maybe he was just doing what idiot shock jocks the world over do: spew garbage for advertising dollars. Interestingly enough, the leaders of India have been fawning over American astronaut Sunita Williams for a couple weeks now, appropriating her as they see fit, even though she isn’t an Indian citizen.

That 60 people would be injured over a bigoted comment by a mere DJ however, is troubling. There seems to be a bit of “we’re not going to take it anymore” boiling up to the surface in the response of Prashant’s fans.

103 thoughts on “Radio Bigotry (but not in America this time)”