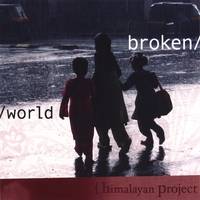 Himalayan Project’s third studio album, Broken World, is finally available for audible consumption!… The crew would like to thank everyone who’s waited patiently for this labor of love to get done, you won’t be disappointed. For those of you who would prefer do legally download your copy, hang tight, it should be a couple weeks tops before it gets to your favorite digital distributor.

One last note/favor, if you like what you hear, don’t be shy… hit up the comments page of the store you bought it from (CDbaby, itune, Rhapsody, etc.) and write a review. Hell, if you didn’t like it, write one too and let us know what you didn’t like (if you really don’t have a life and like stomping out the dreams of independent artists just trying to do their thing

p>Here are the lyrics of the track Manchild (which can be heard on their MySpace page):

I read brown’s the new black, thanks to henna and bhangra,
Shit, I’m thinking lock-up in a Guantanamo slammer,
Geronimo Pratt style, panther type stances,
To keep raisin’ questions till they can’t suppress the answers,
Camphor based prose, C10-H16-0 flow,
I brandish the stress my pops’ handsome face shows,
Homes I don’t dance for dough or pamper hoes, case closed
No rest haven, I’m Wes Craven when they bring the breaks in,
Murderous Raven, staving off your blocks’ onslaught,
Playa, break down lines like Ray Lewis and make music,
That’s makes Buddhists embrace Uzi’s,
And let the spark from their shot light the darkest region in your
heart. [Link]

p>HP’s older song “Postcards From Paradise” has also been made into a video:

A review of Broken World [via RapReviews.com] discusses how some of the themes on this album focus on the future of the Himalayan Project:

… as the boys who knew each other since middle school grew up to become men, their interests began to diverge, with Chee Malabar emerging as the driving force behind the group. As his partner admits: “After school ends / I was all about makin’ moves that had nothin’ to do with the music / but Chee kept the fuse lit.” “Go-Back” ends in suspense, uncertain whether Rainman will continue to rap. The similarly themed “Satisfied” sheds more light on the process many musicians go through when some members of a band or crew are more motivated than others. But instead of calling it quits or burying their heads in the sand, Himalayan Project talk it out, turning “Satisfied” into a genuine dispute. As the potential quitter, it is Rainman who is on the defense when he is confronted with reproaches like “You’re givin’ up on me by sayin’ fuck hip-hop.” He counters,“My mind on the rent, the debt / whatever’s left after the taxes spent / so don’t sing me a sermon ’bout my passions left / when I’ve given my limit to my last extent…” [Link]

p>I love that last line. It’s hard sometime to convey your remaining youthful passion about something when you’ve been at it for so long that it is tempered by an old man’s doubts.

These are interesting observations for those who are already familiar with this act. For the rest of the world these group therapy sessions might not be quite as compelling. But if you can sidestep the fact that you’ve never heard the referenced releases in the HP catalogue, “Satisfied” and “Go-Back” become rare displays of honesty in hip-hop. Himalayan Project manage to do what EPMD, OutKast, or Organized Konfusion failed to do – write songs about their frail partnership. [Link]