Today Senator Barack Obama gave a speech outlining his strategy on terrorism if he were to be elected President. 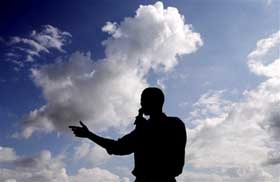 The speech has three solid paragraphs relating to Pakistan:

As President, I would make the hundreds of millions of dollars in U.S. military aid to Pakistan conditional, and I would make our conditions clear: Pakistan must make substantial progress in closing down the training camps, evicting foreign fighters, and preventing the Taliban from using Pakistan as a staging area for attacks in Afghanistan.

I understand that President Musharraf has his own challenges. But let me make this clear. There are terrorists holed up in those mountains who murdered 3,000 Americans. They are plotting to strike again. It was a terrible mistake to fail to act when we had a chance to take out an al Qaeda leadership meeting in 2005. If we have actionable intelligence about high-value terrorist targets and President Musharraf wonâ€™t act, we will.

And Pakistan needs more than F-16s to combat extremism. As the Pakistani government increases investment in secular education to counter radical madrasas, my Administration will increase Americaâ€™s commitment. We must help Pakistan invest in the provinces along the Afghan border, so that the extremistsâ€™ program of hate is met with one of hope. And we must not turn a blind eye to elections that are neither free nor fair â€“ our goal is not simply an ally in Pakistan, it is a democratic ally. (link)

The AP article on the speech interprets this as a threat: if Musharraf doesn’t do the job, we’ll invade.

Actually I think the lines in question could be interpreted differently — I think Obama is merely suggesting that U.S. troops could be deployed to take out selected targets in the border provinces, and then removed. “Targeted strikes” isn’t quite the same as “invasion,” though it’s close: it does sound like Obama is saying such operations could be conducted even without Musharraf’s express permission.

On a separate note, it’s good to see Obama emphasizing the value of inculcating secular education and a culture of democracy in Pakistan. It’s now become increasingly clear that there are millions of Pakistanis who want another try at democracy; the demand that Musharraf relinquish some of his power can no longer be shrugged off.

142 thoughts on “Obama on Pakistan”