If womens boxing becomes an Olympic sport in 2012, the Afghan women’s boxing team is set to become the new feel good story, the Jamaican bobsled team if you will.

These women have a lot of heart, just to train, given restrictions on women even in post-Taliban Afghanistan:

The training is sponsored by a peace group who want to give women more self-respect, and reclaim boxing as a sport in a country scarred by conflict – making martial arts constructive and not destructive. They call it “fighting for peace”. Between training sessions the boxers sit down and discuss non-violent approaches to conflict resolution.

The NGO backing the project, Co-operation for Peace and Unity, is headed by Kanishka Nawabi. He says they are teaching women to be confident and regain self-respect in a male-dominated society. [Link]

Of course, there are some men who will be threatened for precisely that reason – they don’t women playing sports, especially not violent ones, and they definitely don’t want them to become to assertive. This is why it’s a subversive action. After all, this is what is happening to women in regular schools:

In the southern Afghan province of Helmand, the Taliban is waging war not only on foreign and Afghan troops, but on education. Of 224 schools that opened after the Taliban fell, at least 90 have been forced to close because of threats and attack — especially schools that teach girls. [Link]

and the girls from the Kabul Beauty School have been threatened with death for defaming the country (not because of their beautician work but because of the other things the book says about them).

p>Click on the image below to go to the video newsclip. Unfortunately, I wasn’t able to embed it, but the video is fun, enlightening and short. 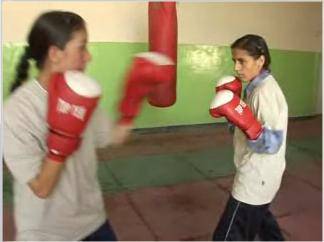