Erstwhile Sepia blogger and fanatical culture vulture Manish would be so proud! A book by a desi author with a desi protagonist without saris, bindis, mehndi, mangoes, spices, or faux indic fonts on the cover! 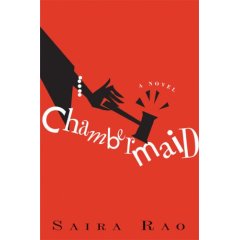 Cast your eyes to the right, my friends. Behold the cover for Chambermaid, by Saira Rao. Kinda boring, no? Eh…we’re a fickle bunch.

So what’s this assimilation sensation about, you ask? Well, I have no idea. The book hits shelves in July and the publicists didn’t send a review copy to the bunker (ahem) but given the pre-launch reviews I’ve spotted, this should be decent beach reading. Especially for all you desi lawyer types reading this site. Especially since Ms. Rao clerked for a Federal Appeals Court Judge in real life.

Sheila Raj is a recent graduate of a top-ten law school with dreams of working for the ACLU, but law school did not prepare her for the power-hungry sociopath, Judge Helga Friedman, who greets her on her first day. While her beleaguered colleagues begin quitting their jobs, Sheila is assigned to a high-profile death penalty case and suddenly realizes that she has to survive the year as Friedmanâ€™s chambermaid â€” not just her sanity, but actual lives hang in the balance.link

Will this become the next Prada? Who could this eeevil Judge Friedman possibly be? Where have you heard of Saira Rao before? These, and many more of life’s mysteries, will be answered after the jump. Hello again, my lovelies. Thanks for joining me as I pull on my gumshoes and set off detecting.

To answer the question of whether this will sell, ask yourself if that cover looks familiar. Doesn’t it look like this dishy fictionalized memoir of life in the publishing trenches, working for a raving bitch? Or this tattling tale of nannying for the rich and misbegotten? And there’s the poorly-written, not-nearly-as-delicious-as-it-should-have-been grandmommy of them all.

All the covers are cartoon-ish, use blacks, whites, reds, flat images, and are vaguely retro. Unlike Manish, I’m not touchy about exoticizing covers, but I am afraid that the law of diminishing returns might come into effect and the impending barrage of work-and-tell memoirs will be eventually relegated to the $1 bin.

The Kirkus review was tepid:

The devil wears judicial robes in this unoriginal law clerking expose, penned by a former clerk to an appeals judge…Sheila is unprepared for long work days, harried colleagues and an unreasonable boss. The judge is respected in the legal community for her sharp mind, though she forgets the names of her law clerks on a daily basis and is racially insensitive, calling Sheila Pakistani when she is, in fact, Indian-American. She abuses her adminstrative staff…even cancels lunch hour for her clerks…But there is something that makes Sheila’s job a bit more bearable – a Yale Law grad named Matthew – though each has a long-distance significant other standing flimsily in the way of love.

I’m torn between wanting a good beach read, and being slightly bored by these “racial slights.” Am I insensitive for not caring? And why does the love interest have to be some Ivy-league whiteboard cutout? Why not a cab-driving immigrant architect, or a witty entrepeneur, or even an astronaut-blogger?

What? It could happen… 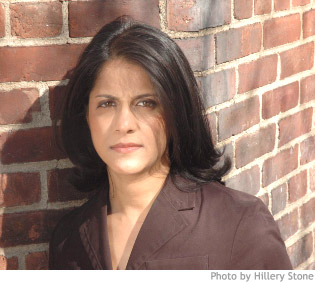 And you may have come across Saira Rao’s name and or writings before if you’ve been unlucky enough to read Intent Blog. I keed, I keed. My thoughts on Deepak Chopra aside, and based on the two posts I read, she’s an interesting writer with an engaging, intelligent, feminist perspective. Who, um, happens to be at least an eleven on the law-clerk-hot scale.

Given the utter lack of subtance to this post, let’s see if we can come up with something solid in the comments. Anyone clerked for a Helga Friedman (or for Judge Dolores Sloviter)? Is this cover better than the saris and mangoes? Has anyone actually read the book, and if yes, is it any good?

36 thoughts on “The Devil Bangs a Gavel”