Despite their staunch alliance, relations between Pakistan and the USA are … tense. If you were a Pakistani Prime Minister, what could be more natural than … a more personal approach to break the ice, to fill the yawning gap, to closely bring together two former intimates, these two strange bedfellows? 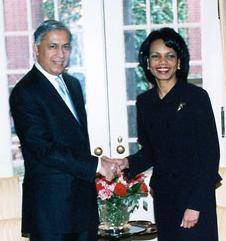 “Shortcut” Aziz gets shot down

According to the new biography of Condoleezza Rice, Shaukat Aziz tried to (ahem) charm Dr. Rice when she visited Islamabad in 2005:

Aziz “tried this Savile Row-suited gigolo kind of charm: ‘Pakistan is a country of rich traditions,’ staring in (Rice’s) eyes …When Rice sat down with Prime Minister Shaukat Aziz, who fancied himself as a ladies’ man, Aziz puffed himself up and held forth in what he obviously thought was his seductive baritone,” the book says. [Link]

p>Aziz was not some wide eyed naÃ¯f when it came to the ways of the West. He was a former ibanker, a VP at Citibank who had worked in London, Athens and New York. He may have had good reason to consider himself an experienced ladies man, a master of international affairs as it were, but he clearly met his match:

“He bragged — to Western diplomats, no less — that he could conquer any woman in two minutes… There was this test of wills where he was trying to use all his charms on her as a woman, and she just basically stared him down … By the end of the meeting, he was babbling. The Pakistanis were shifting uncomfortably. And his voice visibly changed…” [Link]

p>He could conquer any woman in two minutes Pakistan’s response to these reports is that it’s all a cross-cultural misunderstanding:

Pakistan’s deputy information minister Tariq Azeem said that Aziz was only being polite. “The prime minister wanted to be nice with Dr. Rice,” Azeem told AFP. “Our tradition is that we should talk to women gently and decently and this was what the prime minister did…” [Link]

Poor Aziz. He completely miscalculated in his approach :

Rice, according to friends and family, had a thing for bad boys… [Link]

Although her name means “with sweetness”, nice guys finish last with Dr. Rice. Manmohan Singh would never have made that kind of rookie mistake, he would have shown Condi why you can’t spell aphrodisiac without desi. This is one part of Nehru’s legacy that we can all embrace.

100 thoughts on “Sleeping with the Secretary”