The jury has returned in the Lina Sinha case, the now 40 year old former Principal of the Montessori School of New York. The verdict? Guilty.

The former principal of a Manhattan private school was convicted yesterday of having sex with one of her students in a classroom when he was about 13 and she was about 30. The jury deadlocked on charges that the principal… also had sex with a second student about five years after she seduced the first boy. [Link]

p>There’s actually a ton of desiness in here. Prosecutors brought up the fact that she lived with her parents to depict her as a sheltered woman, hence her interest in much younger guys:

Prosecutors portrayed Ms. Sinha as a sheltered woman who lived with her parents in the town house housing the school, which her family owned, until she was in her late 30s. [Link]

p>How did she live with her parents in the building the school was set in? Simple. They own the school. She not only lived with mom and dad, but she worked in the family business as well:

Sinha has been a teacher for 16 years at the Montessori International School of New York, which was established by her parents in 1969 … The parents own two similar schools in the city. [Link]

p>Interestingly, reviews of the school are very harsh and negative, particularly on the family owned aspect (to be fair, these were written after the scandal broke and may not be accurate):

It is a completely creepy school. It is family-run, and there seems to be absolutely no accountability. Parents are discouraged from being involved with the school and the teachers; it’s unclear what the teachers’ credentials are… we were quite traumatized by the school. The graduates of the school … seem to be brainwashed, as if all their personality had been bled out of them — it is very very strange. [Link]

p>I don’t know if the school is creepy, but the photo below, taken from their website of somebody who seems to look like Lina, is most definitely creepy! 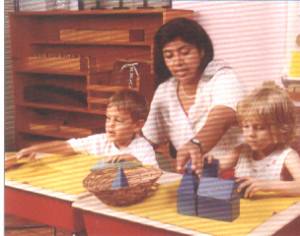 p>There was also a desi juror, a Mr. Sam Desai, who presumably knew that not all women who live with their parents molest underaged boys:

One juror, Sam Desai, said in an interview that although there were some “heated moments” during deliberations, the jurors did not doubt the credibility of the first accuser. His testimony was the “primary piece of evidence” leading to conviction, Mr. Desai said.

He said the jurors, during deliberations, did discuss whether they would think differently about the case if the defendant was a man and the accusers were women. “Those types of hypotheticals were used all the time, and what came out was the best result,” he said. [Link]

She’s been convicted of several minor counts as well, and now faces up to 7 years in jail:

Besides the sodomy and witness bribery counts, Sinha was convicted on several counts of criminal impersonation and falsely reporting an incident, all misdemeanors punishable by up to a year in jail. [Link]

p>The judge just raised her bail seven times from $50,000 to $3.5 million dollars. Her lawyer said her parents would come up with the bail and that they were confident of winning upon appeal.