In today’s NYT there is an article about a bobo couple’s experiment with low impact living in “an elegant prewar on Lower Fifth Avenue”. They’re eating only locally grown food stuffs and eschewing even spices, olive oil and vinegar because these come from further away. They’re buying only food, composting their trash, and they’ve stopped using paper. All paper. Writing paper, paper towel, and even … toilet paper. This last bit is supposed to let us know that they’re serious about their experiment: 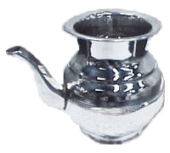 A visitor avoided the bathroom because she knew she would find no toilet paper there… Toothpaste is baking soda … Nothing is a substitute for toilet paper, by the way; think of bowls of water and lots of air drying… [Link]

p>I’m just not impressed. Don’t get me wrong, as an ABD I like my conveniences, and I’m not willingly going give this one up. On the other hand, it just doesn’t seem like that much of a hard core thing to do. My FOB friends swear that TP is unhygienic compared to a lota; a buddy from silicon valley used to smuggle his in and out of the bathroom because he just felt … dirtier without.

p>For this couple, it’s all part of a stunt designed to generate a non-fiction book (he’s a writer). However, a far better place to look for hard core urban environmentalism is in the Dharavi slums of Bombay, Asia’s largest. Dharavi takes the discards of Bombay’s 19 million residents and turns it into close to $1 Billion of production a year, making it the world’s richest slum. 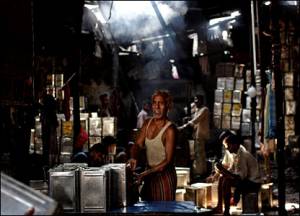 … Dharavi is becoming the green lung stopping Mumbai choking to death on its own waste… This is where 80 per cent of Mumbai’s plastic waste is given a new life. All around young boys cart wheelbarrows filled with everyday plastic waste. Junk is a word that does not exist. Dharavi’s plastic recycling industry employs almost 10,000 people, melting, reshaping and moulding discarded plastic. Close by you will find the soap-makers who reprocess soap from hotels and schools. In single rooms hundreds of men toil in the heat over large metal troughs filled with sinister-looking yellow-green liquid. Around them their co-workers boil vats of molten soap, stirring the cauldrons with oar-sized sticks.

Dharavi is an extraordinary success story, its recycling industry employs over 250,000 people … The new money through recycling has in effect spawned a new slum gentry. Certain corners of Dharavi have even gone upmarket with bars, beauty parlours and clothing boutiques. Last week a major bank opened the slum’s first ATM. [Link]

I don’t want to romanticize Dharavi. These sound like hazardous working conditions, and I’m sure much of what’s going on is toxic. Life in Dharavi sounds grim:

There is little sign of clean drinking water and the sanitation facilities are appalling – up to 800 people are forced to share one toilet. [Link]

p>But these are the folks who really impress me with their recycling. Of course, a book on them wouldn’t sell as well as a book on the bobo couple would. For one thing the conditions in Dharavi are too far from those in America for the audience to comprehend, for another you can’t write a book about the third world without a white protagonist.

p.s. The residents of Dharavi are currently fighting a battle to prevent their slum from being razed as part of an urban redevelopment scheme. Expect to hear more about it as the conflict heats up.

Related posts: Politicians are full of …

92 thoughts on “A whole lota environmentalism going on”