It is a picture that I imagine many who read this blog have a variation of in one form or another. You know, that image of the the nuclear desi-American family– returned to the sub-Continent for a long (summer) vacation– of mom, dad, brother, sister posing in front of the Taj Mahal. The group is huddled close on that bench hoping for the perfect portrait. And really, how can the picture be bad? That grand marble monument towering in the background, its skewed reflection glimmering in the rectangular pond. Observing that familiar image reflected on the movie screen and understanding that feeling of closeness and comfort of being together in a foreign place, put a big smile on my face, as did most of Mira Nair’s latest film The Namesake. 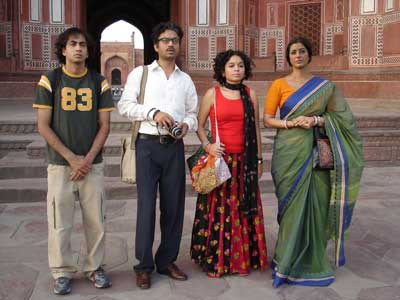 I know we’ve previously blogged a review of the film, but this was a very personal book for me, I think for most of us. I even made my mom, who doesn’t usually read “English novels” read the book, and she loved it. So I think the movie merits more than just one review. In any case, I’ll do my best not to repeat too many of the things cicatrix mentioned earlier, and promise to stay away from the word timepass. The film was “just too good yar,” to merit the use of the word to describe it.

I find it hard to have high expectations for movies based on books. I have been burned too many times. With that in mind, my expectations for the movie were upward leaning, but not over reaching. I didn’t know how Nair could add visuals to a novel that was for me already so vivid. As the stunning opening credits blurred between Bengali and English, I immediately knew Lahiri’s story was in good hands. Nair and her longtime collaborator Sooni Taraporevala’s treatment stayed true to the novel while also providing an original point of view. Their take does a fine job of including the highlights of the book, but in their attempt to hit all the major points, the movie misses some of the extras that made the story so poignant. (Warning: Spoiler Alert, especially if you haven’t read the book)

The inclusion of the Ashima and Ashoke’s early years was good, but I wanted to see more of their early married life, more of Ashima’s struggle adjusting to life in America. To life without her family. To life without the familiar. I wanted to see her overcome that struggle, and grow into her life in America, as we saw in the novel. I think that is an important part of the story, and not spending enough time on some of these nuances took away from the story’s gravitas. The significance of the late night/early morning phone call for example, how was the audience supposed to know that odd-timed phone calls only meant significant news from India, usually bad?

I also wanted to see more of Sonia (Sahira Nair) and Gogol (Kal Penn). As my sister pointed, the book gives Sonia the shaft, so it was wrong for me to expect more of her in the film. Fine. But on their trip to India , I wanted to see more background, the disappointment from the kids in having to leave for their whole summer vacation, more awkward interaction between the American cousins and their family in Calcutta. I wanted the audience to understand and the movie to show that feeling of having all this family so far away, whom the ability with which to connect to is handicapped by distance. As cliche as it sounds, I wanted the film to show more of the duality of hyphenated-American life. But in the end, this is a minor quibble.

In the novel, Gogol’s character kept the story moving, he was the protagonist. What I found suprising was that in the film, it was Ashima, to the credit of Bollywood actress Tabu, who pushed the story forward. Tabu’s take on Ashima was simply brilliant. Her performance was flawless and natural, and she really made the character come to life. For me, Tabu stole the show, completely overshadowing the perfomance of every other actor in the film. If I was to identify with any character in the book, it would have been with that of Gogol, but in the film, it was Ashima, who made me feel at home. In her, I saw our mothers, and their struggle. I can’t say it enough, Tabu’s performance struck me, and is reason enough to go back and see the movie again and again.

I must also give credit to Irfan Khan, whose subtle, guarded portryal of Ashoke, represented perfectly the hands-off desi style of hands-on parenting. He stayed far enough away to not be outwardly emotionally involved, but close enough for us to know he really cared. Zuleikha Robinson’s Moushimi, I didn’t like her character, but Robinson played it greatly. Moushimi is sultry and trashy at the same time, and Robinson brought this vibe to the movie in the short on-screen time she was alloted. I know many a reviewer disagree with me and have genuinely liked Penn’s performance, given that this role was his first major dramatic one, but I wasn’t too impressed. After his appearances on 24 and Law and Order (and to be fair, Penn should take any role he gets, terrorist, 7-11 clerk, or otherwise–he will be soon starring in an upcoming comedy pilot on ABC about paramedics) my expectations were low, and to that end he didn’t disappoint. Just comparing his reaction to Ashoke’s death with Tabu’s, Penn’s seemed force. The dramatic didn’t seem natural to him. I think Nair must be given credit for her ability to draw out whatever drama she could from him, but my wife and I both felt he used that same dumbfounded expression (the one we saw in American Desi, Harold and Kumar, Where’s the Party Yaar?) throughout the film. This may come across as hate, but clearly Nair saw something in him, and I think he can do better. To give him the benefit of the doubt, this was his first major dramatic role.

In the end, Nair’s big-screen translation didn’t disappoint. The visuals were more subtle than Monsoon wedding, but striking nonetheless. The transitions between countries were seemless, the blending of Calcutta’s massive bridges and streets into New York’s was natural, and symbolic at the same time. She did it, Nair successfully added color to an already amazing story. I mentioned earlier that I smiled almost the whole film, until the last seen anyway. It was the final party held at the Ganguli home dramatized on screen that got me in the end. Ashima is saying goodbye to the family she and her husband had created in America (from the novel):

“For 33 years she missed her life in India. Now she will miss her job in the library, the women with whom she’s worked. She will miss throwing parties. She will miss living with her daughter, the surprising companionship they have formed, going into cambridge together to see old movies at the Capital Brattle, teaching her to cook the food Sonia had complained of eating as a child. She will miss the opportunity to drive, as she sometimes does on her way home from the library, to the university, past the engineering building where her husband once worked. She will miss the country in which she had grown to know and love her husband. Though his ashes have been scattered into the Ganges, it is here in this house and in this town, that he will continue to dwell into her mind….”

64 thoughts on “The Tabu of the Namesake”