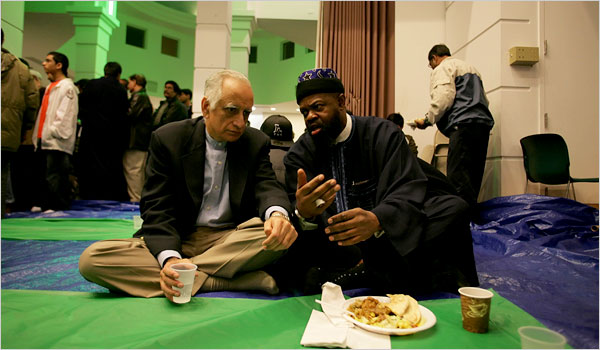 There’s a really interesting article in the New York Times on the “uneasy” coalition that’s building between African American and immigrant Muslims in post-9/11 New York. Although I’m generally cynical of articles that tout people of color solidarity, I found this one to be fairly realistic and yet uplifting at the same time.

One interesting fact that I learned from the article is that of the estimated six million Muslims who live in the United States, more than a third are desis. About 25 percent of American Muslims are African-American, and 26 percent are Arab. Unsurprisingly, there’s been little cohesion between the African American and immigrant Muslim communities. The article explains that some of the decades-long tension is based on class:

Many Muslim immigrants came to the United States with advanced degrees and quickly prospered, settling in the suburbs. For decades, African-Americans watched with frustration as immigrants sent donations to causes overseas, largely ignoring the problems of poor Muslims in the United States.

Then there’s that skin color thing:

Aqilah Muâ€™Min [an African American], lives in the Parkchester section of the Bronx, a heavily Bangladeshi neighborhood. Whenever she passes women in head scarves, she offers the requisite Muslim greeting. Rarely is it returned. â€œWe have a theory that says Islam is perfect, human beings are not,â€ said Ms. Muâ€™Min.

When Imam Talib vented his frustration at a meeting with immigrant leaders in Washington, a South Asian man turned to him, he recalled, and said, â€œI donâ€™t understand why all of you African-American Muslims are always so angry about everything.â€ Imam Talib searched for an answer he thought the man could understand.â€œAfrican-Americans are like the Palestinians of this land,â€ he finally said. â€œWeâ€™re not just some angry black people. Weâ€™re legitimately outraged and angry.â€

Post-9/11, however, African American and immigrant Muslims have started to build stronger ties.

Black Muslims have begun advising immigrants on how to mount a civil rights campaign. Foreign-born Muslims are giving African-Americans roles of leadership in some of their largest organizations. The two groups have joined forces politically, forming coalitions and backing the same candidates.

The story elaborates on one particular newly-forged relationship: that between Imam Talib, an African American prison chaplain from Harlem, and Faroque Khan, an Indian-born physician who founded a mosque in Long Island:

[After] Sept. 11, Muslim immigrants found themselves under intense public scrutiny. They began complaining about â€œprofilingâ€ and â€œflying while brown,â€ appropriating language that had been largely the domain of African-Americans. It was around this time that Dr. Khan became, as he put it, enlightened. A few weeks before the terrorist attacks, he read the book â€œBlack Rage,â€ by William H. Grier and Price M. Cobbs. The book, published in 1968, explores the psychological woes of African-Americans, and how the impact of racism is carried through generations.â€œIt helped me understand that even before youâ€™re born, things that happened a hundred years ago can affect you,â€ Dr. Khan said. â€œThat was a big change in my thinking.â€

There are some interesting details to their alliance:

After Dr. Khan read the book â€œBlack Rage,â€ he and Imam Talib began serving together on the board of a new political task force. Finally, in 2005, Dr. Khan invited the imam to his mosque to give the Friday sermon. Dr. Khan then began inviting more African-American leaders to speak at his mosque…The group had recently announced a â€œdomestic agenda,â€ with programs to help ex-convicts find housing and jobs and to standardize premarital counseling for Muslims in America.

The more separate we stay, the more targeted we become,â€ Dr. Khan said.

The article is worth a read. And the multimedia feature, which contains more of an in-depth perspective from members of both communities, is also worth checking out.