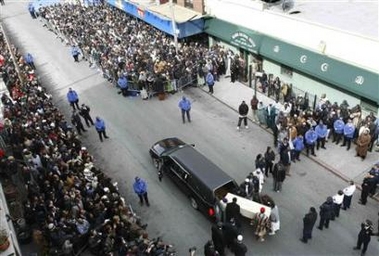 In the very interesting New York Times article that Naina discusses below, about relations between African-American and immigrant Muslims in the city, virtually all the immigrant voices are desi and Arab, with scarcely a mention of the city’s growing African Muslim community from countries like Senegal, Guinee, Ivory Coast and Mali. The lack of mention felt a bit odd coming in an article published at the very same time that the city was reeling from a major tragedy that put West African Muslims front and center in local news.

As many of you know there was an accidental fire in a house in the Bronx last Wednesday night that killed ten people, nine of them children, all from an extended family from Mali. Excluding 9/11, it’s the greatest loss of life in such an event in the city since the nightclub fire in 1990 that decimated another immigrant group, the Garifuna. There has been quite an outpouring of support in the city, from public officials, churches, synagogues, and businesses: for instance, the New York Yankees are covering expenses for the five victims who have been buried in the U.S., while Air France was covering repatriation of the five other bodies to Mali.

I’ve spent much of the past few days covering the story for work, and attended community gatherings in the Bronx and Harlem over the weekend and also the funeral on Monday, at the Islamic Cultural Center on East 166th St. in the Bronx that has served as the mourning and family gathering headquarters since the fire. On Monday afternoon several thousand people packed the low, storefront-ish masjid and the streets outside to mourn and pray as the eight hearses pulled up and the ten small, plain wood caskets were unloaded for a brief service. The crowd was mostly West African but there were Latino and African-American people present too, along with a host of public officials. Mali’s foreign minister flew in on Saturday, and ambassadors from other African countries paid respects as well.

It’s a sidebar to the main story, but there was a desi angle here that really struck me. There is a lot of talk in situations like these about the affected community coming together in solidarity, which they very much have — in a moving, almost beautiful way. And there is also much talk about the city uniting, “ordinary New Yorkers” pitching in money and other support, and all of this too is very much true. What can get a little lost in the narrative is how much inter-immigrant solidarity we also witness at times like these. 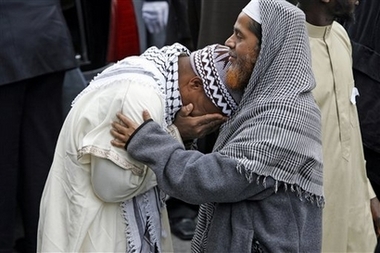 And so I was struck, and it really warmed my heart, to see how present the Bangladeshi community in particular has made itself at this time. As early as Friday people at Bangladeshi masjids were raising money for the victims, and on Saturday an imam named Hafiz Choudhury, from the Madina Masjid on 11th Street in the East Village, and another gentleman who was introduced as the head of a Bangladeshi organization, were in Harlem to contribute several thousand dollars to the family relief fund. Choudhury is pictured here with one of the family members outside the funeral.

There are many layers of solidarity here: Islam, immigration, and a lot of professional overlap, particularly in the taxi and livery cab sector. Choudhury told me that Islam teaches that whenever there is tragedy in the community, anyone who is in a position to do so must come out and show solidarity, because we don’t know who will be the next to go: those who die merely precede the rest of us on a path we will all follow. That’s the religious rationale — one that all the great traditions express each in its own way — but you could feel that there was more than that at play too. There was a kind of recognition that comes not only from religion but from many other layers of social fact in this most complex, most global of cities.

31 thoughts on “A Note on Inter-Immigrant Solidarity”