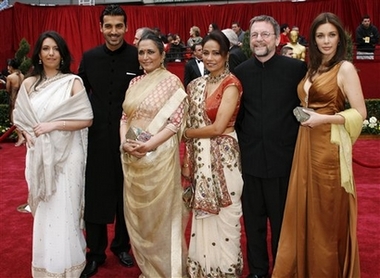 Apparently the only surprise about Deepa Mehta’s Water losing out on the Best Foreign Film award last night was that the eventual winner wasn’t Pan’s Labyrinth, the consensus favorite, but rather The Lives of Others, by an impossibly tall German director with an impossibly aristocratic Prussian name. So there’s little gnashing of teeth or rending of garments in the Indian press today, simply matter-of-fact recognition that “India’s Oscar jinx” carries on. It’s also apparently a known fact (I never get to the movies, so I’m just repeating what I read) that the entire field for the foreign-film award was extremely strong. So no injustice here any way you cut it.

However, I am rather exercised at the Monday morning snub from the newspaper round-ups of red carpet fashion, which roundly ignore the gorgeous heirloom gold-threaded Banarasi sari in which Mehta graced the ceremony. Los Angeles Times, New York Times — no one paid the slightest notice, positive or negative, to the passage across the red carpet of the Water crew. Even my mellow Hank Stuever in the Washington Post — political, worldly, and queer as the proverbial three-dollar bill — ignored the desi contingent, his confessed ogling of Ryan Gosling affording John Abraham no residual love.

Oh well. Perhaps it’s all for the best that our peoples passed by under the radar, considering the standard-issue snark that’s become de rigueur in such coverage. Or perhaps coverage was the point — body coverage, that is: with so much exposed bosom and leg to take in — let alone Jack Nicholson’s creepily depilated dome — those who took cover in dignified, discreet outfits necessarily condemned themselves to oblivion in the morning news. 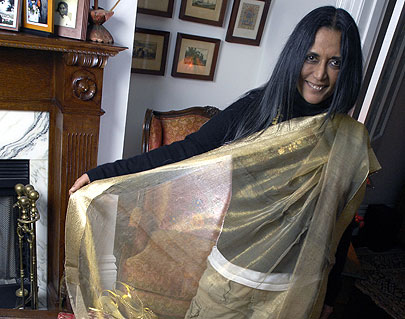 Deepa could have joined the flesh parade, had she wanted to match up against Meryl Streep and Helen Mirren in the “do they still got it?” division, a bit of a rigged fixture for a director against two actresses. The dresses were there for the wearing, but the sista had a much better plan:

They must have been throwing clothes at Mehta once the nominations were announced.

“Yes, they were,” she admits. “Chanel, Armani, Prada etc. … approached me. `No, thank you. I’m wearing my mother’s sari.’ For one thing, I’ll never wear a dress in my life: I’m more blue jeans and cargo pants. It was just a question of what sari.”

Her mother’s sari was part of her trousseau.

“My paternal grandmother gave it to my mom when she got married,” she recalls. “It’s gold but because it is so old (from the ’40s), it’s burnished. It’s very subtle. The gold thread is a weave not done anymore. It’s gorgeous and it’s personal. It’s Mom’s.

“And Bulgari wanted to do my jewellery. But I’ll wear my antique Indian jewellery because it goes with the sari.”

Read the full, friendly feature from the Toronto Star here. As for the Oscars, if you’re feeling the pain of desi exclusion, the Economic Times offers you here a kind of consolation.

196 thoughts on “All That Glitters Ain’t (Banarasi) Gold”