We’ve all seen a movie and been inspired to change our lives. Usually, with me, that impulse lasts around as long as it takes me to get home and then I forget or move on. However, in Bharat Gheewala’s case [I can’t make that name up – what could be a better name than that?], he plans to act on this impulse. 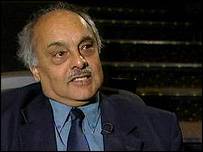 Gheewala’s inspiration came from an unlikely place — the movie “The Last King of Scotland” which should earn Forest Whitaker an Oscar tonight. Watching the movie reminded Gheewala of his own experiences in Uganda over 30 years ago:

“It was a case of leaving the kitchen and the bathroom and all our belongings and just getting out,” he said. “At first no one knew if Amin had meant what he said. But when it became clear that he had there was real panic… “In the end most of us left with nothing. People knew Amin … was a killer and would carry out his threats if we did not obey him…” [Link]

p>Interestingly enough, it also made Gheewala, now a successful businessman in the UK, feel he should do something to help Uganda:

“There is a saying that when you prosper you should give something back to the land of your birth, the land that created you as a person and that’s what I want to do.” [Link]

Gheewala says he now wants to build a hydroelectric plant to generate electricity in the south of Uganda, and create a lasting legacy for his family. I can’t tell if he’s serious or not, or if this is all clever PR, but I thought, on Oscar night, it would be nice to spotlight somebody who at least claims to have been inspired by the silver screen.