This is a week of good news and bad. The good news is that Goldman Sachs thinks the Indian economy is growing even faster than previously expected:

India could overtake Britain and have the world’s fifth largest economy within a decade as the country’s growth accelerates, a new report says… By 2050 India’s economy could be larger even than America’s, only China’s will be bigger, the bank predicts. [Link]

The bad news is that child malnutrition rates are still startling high in India. This week the PM felt a need to deal out thapars: 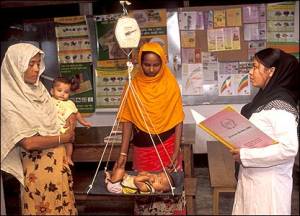 “Our prevalent rate of under-nutrition in the 0-6 age group remains one of the highest in the world,” Mr Singh said. “These are startling figures and the situation calls for urgent action.” [Link]

Last year the UN children’s agency, Unicef, said that the average malnutrition rate in some Indian states – such as densely populated Uttar Pradesh – was 40%. That is higher than sub-Saharan Africa where it is around 30%, Unicef said. [Link]

Most striking is the fact that the economic growth of the past 15 years hasn’t necessarily translated into better child nutrition, and that malnutrition has actually risen in some places:

A recent health ministry survey said that the number of undernourished children below the age of three had actually risen in some states since the late 1990s, despite higher incomes and rapid economic growth. [Link]

At the same time, state efforts have also failed to significantly alleviate the problem:

In a strongly-worded letter sent to state chief ministers, Mr Singh said that a massive programme to improve health and nutrition had failed…The prime minister said that the country’s Integrated Child Development Services (ICDS) scheme had not sufficiently dented child malnourishment levels. “There is strong evidence that the programme has not led to any substantial improvement in the nutritional status of children under six,” Mr Singh said, urging strong action… The letter said that the programme had been “poorly implemented”.

The ICDS scheme was established in 1975, and is one of the biggest childcare efforts in the world, providing immunisations, supplementary food and medical check-ups for pregnant women. The scheme is implemented by thousands of state-funded community workers in poor, rural areas with limited or no medical facilities. Correspondents say that efforts to provide nutritious food to children have been constantly marred by corruption in which food intended for the poor is stolen or sold to other people. [Link]

p>One place to start, according to the UNICEF report, is by improving the status of women:

“the low status of women in South Asian countries and their lack of nutritional knowledge are important determinants of high prevalence of underweight children in the region”. The report also blames “inadequate feeding and caring practices for young children” for the grim situation in South Asian countries. It says it is important that “in the interests of improving child nutrition, women’s status should be raised”. This need is very urgent in South Asia, including India, it adds. [Link]

p>I’m a pragmatist. Ideology is fine and good, but it doesn’t put food in a baby’s belly at the end of the day. In this case both the state and the market have failed to deliver calories to needy children. Clearly something different needs to be done, something where there is clear accountability and measurement of outcomes. What India’s doing today is simply not good enough.

81 thoughts on “Hungry children failed by state and market”