A few months ago our News Tab was blowing up with people pointing us to the story of Ram Bahaudr Bomjon (a.k.a. the Buddha Boy) of Nepal:

Ram Bahadur Bomjon (born May 9, 1989, sometimes Bomjan or Banjan), also known as Palden Dorje (his official Buddhist name), is a young Buddhist monk from Ratanapuri village, Bara district, Nepal who drew thousands of visitors and media attention for spending months in meditation, allegedly without food or water, although this claim is widely contested. Nicknamed the Buddha Boy, he began his meditation on May 16, 2005. He went missing on March 11, 2006 and reappeared on December 25, 2006. [Link]

p>Just this past week the famed “Buddha Boy” re-emerged from the woods so dark into which he had disappeared for the last 10 months. Come on, was he really living in the woods for 10 whole months? Pictures never lie folks. If David Blaine can live inside an ice cube than surely this boy can live in the woods doing nothing but meditating: 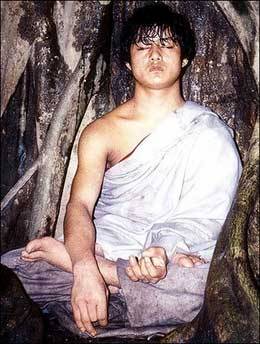 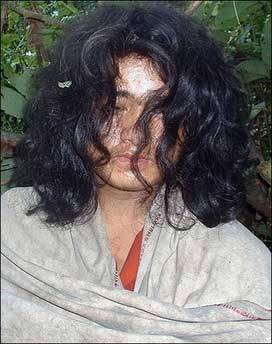 With regards to his return:

The boy was spotted Sunday by cattle herders in the jungle, and a team of police and officials was sent Monday to investigate, said Harihar Dahal, an administrative official in the area.

Many followers believe Banjan is a reincarnation of Gautama Siddhartha, who was born in southwestern Nepal around 500 B.C. and later became revered as the Buddha.

However, Buddhist priests who visited the boy said he was not the incarnation of Buddha, but added they believed he had been meditating for months.

Buddhism teaches that right thinking and self-control can enable people to achieve nirvana — a divine state of peace and release from desire. Buddhism has about 325 million followers, mostly in Asia. [Link]

I really sympathize with this kid because I think I can relate to his experience. For the past week I have been without internet access (phone company messed up) and my cell phone has been dying a violent death (10 minutes of battery time even after a full charge). All this in the middle of my move across the country during the holidays. The Buddha Boy probably scrounged for food and appealed for alms in his 10 months in the woods. I have been begging friends if I can come over for 10 minutes of internet access for a whole week! Without the ability to find the nearest Target and properly set-up the bathroom in SM’s new Houston bureau offices, I look nearly as disheveled as the Buddha Boy! My point? Even if he isn’t really the reincarnated Buddha I admire the kid, especially since I’ve only had to live like him for a week and am already near my spiritual breaking point. I entered Ikea for the first time in my life yesterday. The avarice of men was laid bare for my eyes inside that blue temple of lasciviousness. I left feeling utterly overwhelmed and in need of centering.

As for the Buddha Boy, I think I can predict the next chapter in his young life. He will soon meet a beautiful temptress named Kamala and will spend the next 20 years with her. Come to think of it, maybe I should do the same.

36 thoughts on “The "Buddha Boy" returns”