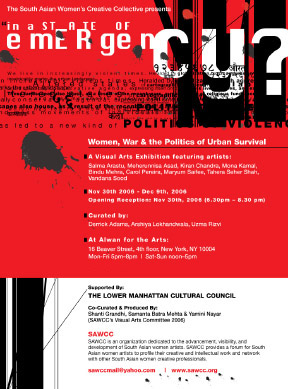 Earlier this evening I checked out the opening of “In a State of Emergency? Women, War & the Politics of Urban Survival,” an exhibition presented by the South Asian Women’s Creative Collaborative here in New York. The show is up at the Alwan Center for the Arts in Lower Manhattan through December 9th. It features photography, video, multimedia and installation pieces by nine desi sisters: Salma Arastu, Meherunnisa Asad, Kiran Chandra, Mona Kamal, Bindu Mehra, Carol Pereira, Maryum Saifee, Tahera Seher Shah, and Vandana Sood.

I’ll go straight to the insta-review, dangerous as that is since I only just got back and the air-kissing, red-wine-in-plastic-cups opening atmosphere perhaps wasn’t the most conducive to critical contemplation (though I did stay away from the wine). So I hope other folks will chime in with their own impressions. Visually, I most enjoyed Shah’s “Jihad Pop” series of digital prints, with their stencils of desi and Islamic iconography set amid fields of sheer black and white. The most thought-provoking to me was Saifee’s series of “Postcards from the Middle East,” which she bills as self-portraits stemming from her experience as a Peace Corps volunteer in Jordan: as she explains in the catalog, “my skin color made my authenticity as an American up for debate. On the street, I would either be mistaken as a Sri Lankan maid or as a Bollywood film star.” And I found Arastu’s “New York and I” series frustrating: visually fabulous in their superimpositions of New York street and subway scenes with armies of unhinged, chattering silhouettes, but marred by the poems written into each piece, which struck me as trite and superfluous.

The show is a project of SAWCC, the estimable organization that is now in its tenth year and that sponsors, among other events, the annual literary conference that a number of Mutineering types attended last year. SAWCC (pronounced, delightfully, “saucy”) continues to do the Lord’s work for culturally minded macacas, and they deserve all our support.

A show like this one, however, also suffers from self-imposed boundaries. It is imbued with a very 1990s, hyper-theoretical approach to the politics of representation that makes the inherent whimsy and improvisation of artistic creation — and, importantly, artistic consumption — feel secondary. The catalog essay, and the shorter version handed out on flyers, are nearly illegible, and I’ve got Ivy degrees and a reasonably honed appreciation for theory. It frustrates me no end — and this is not a knock on this exhibition specifically; far from it, it’s a common problem — when art is “explained” by its sponsors and presenters using language like this:

These increasingly paranoid urban spaces harbour fears of the irrational violence equated with terrorism, inducing a society of control in which surveillance, intimidation, and the erosion of personal liberty forces forms of resistance that employ the strategies of the absurd. Increasingly aware of the machine that governs and questioning the methods and motives of the state, the artists in this exhibition rely on the absurd, irrational, and uncanny to produce counter hegemonic narratives to ideological, religious, cultural, and social modes of control.

Like the artists of Dada, these contemporary practitioners respond to the presence of war, excess, and other degenerate transgressions of contemporary urban life. Like the women of Dada, they also respond to issues of identity altered by male repression and subjugation, aware of a world in which urban social orders are based on the governance of space, each system of control based on meta-structuring agents, making each space, city, and response, culturally specific. Such disciplinary systems of control exude masculinity, often necessitating a physical, emotional, and psychological domination of women, placing them in a “state of emergency.”

Got that? Read it again: It’s not gibberish, it just feels like it is. There is plenty of meaning, and indeed, a viable argument or several in those hyper-extended, comma-laden sentences. The problem is, those arguments are being beaten into us with the implicit presumption that, ultimately, there is a right way and a wrong way to apprehend this art. And that, plainly, is bullshit. For one thing, taken as theory alone, the argument above merits unpacking; it cobbles together numerous assumptions and interpolations about the world about us with verbs like “induce,” “force,” and “necessitate,” that are dead giveaways of a lack of interest in, or openness to, the serendipitous and the unexpected. Rigidity and art make poor companions, as previous uses of the word “degenerate” in the context of art criticism have made abundantly clear; and I think it’s a disservice to a whole class of potentially interested viewers, as well as to the artists themselves, to fence a potentially interesting exhibition behind such a grim gateway.

45 thoughts on “InstaReview: SAWCC’s “In a State of Emergency?” Exhibition”