Inspired by Anna and Sin, I thought that I would try my hand at fashion criticism. But where to start? I’m straight, and hardly fashion forward. I needed somebody who was in greater need of assistance than myself somebody like … Prabhakaran. While I may not be able to wage a decades long war against the government in Colombo, and I don’t have a cult of personality of my own, I can certainly dress better than him. [Yeah, I'm brave, blogging behind an anonymous handle and making fun of the head of the Tamil Tigers.]

So, ‘Tamil Eezha Desiya Thalaivar’ (how could I call him Thambi?) Velupillai, if you’re listening, here’s what I learned from reading GQ in the gym: 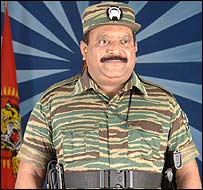 More images of the man on the Tiger webpage.

85 thoughts on “Straight eye for the guerilla guy”