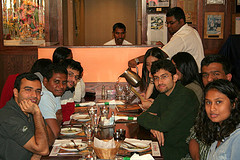 I just wanted to say thank you to everybody who made it to the first ever Chicago Meetup! We had roughly 15 macacas in attendance (more than you can see in that photo) of all varieties: ABD, FOB, Active commenters, Quiet Lurkers, etc. We may not have hit 40, Taz, but I’ll bet there’s never been a sweeter, more easy going, more congenial group of people who’ve shown up.

The event hosted itself, I didn’t have to do a thing other than suggest that we order more food. Oh yeah, and this will appeal to the desi mentality – it was cheap, yo! We ended up $35 over when we collected money, and actually had to hand some back.

Great company, tasty food … really, the only thing that went wrong was that I didn’t take enough pictures, and the two I did take (with Ravi’s camera) don’t really capture the energy of the event.

So yes, there will definitely be another Chicago Meetup, but from what people said, maybe we should wait until the spring? And for those lurkers who were too shy to attend – come on in, the water’s fine!