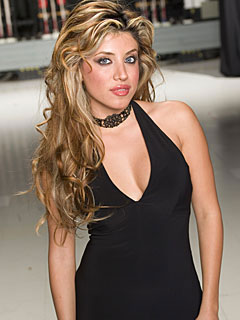 The suspicious-looking individual to the right is a Muslim. Would you feel nervous if you saw her on an airplane?

The reason I ask is that my attention was drawn to the NBC game show “Deal Or No Deal,” which I haven’t actually seen on television, but appears to involve suitcases that may or may not be filled with large amounts of cash, presented to contestants by a bevy of hot models. The show’s website emphasizes the models, and when I checked it out the featured model to appear on my screen was this one, #13, name of Leyla. It struck me from her name and her visage that she might just be, you know, one of them, even though the web bio supplied for her only told me that she came from Toronto. And that she has “the face of an Angel and the drive of a tigress,” and was once a tomboy but is now “no longer a tomboy by any stretch of the imagination,” if you get my drift, phwarrr phwarrr. Fortunately the Persian Mirror was more forthcoming in identifying Leyla Milani and claiming her as one of their co-ethnics, which means in all likelihood she’s Muslim as well.

So, you ask, what does this have to do with the price of chapatis? Well, not much, really, except that the reason I was investigating “Deal or No Deal” in the first place was because of this Craigslist ad that was picked up today by Gawker:

Do you get nervous when you see a Muslim on an airplane? Have your opinions about Muslims changed since September 11? Do you have family or friends that get nervous around Muslims?

A NEW SHOW SEEKS New York families who have traditional family values but are uneasy around Muslims.

The show will profile families in different communities across the country. This one hour documentary-style series from the producers of “Extreme Makeover: Home Edition” and Â“Deal or No DealÂ” will take a look at the people and cultures that make up America.

This series will also explore other issues that families from varied backgrounds face in their day-to-day life and provide opportunities to them that they might not have access to otherwise. This is not a home makeover show.

This is a paid opportunity.

If you are interested or have any questions about this show, please e-mail the following information to AshtonRamsey@Yahoo.com.

I repeat: THIS IS NOT A HOME MAKEOVER SHOW. So even if your closets are jammed full of last year’s hijabs and were decorated in Saddam-era 1980s Arabesque kitsch, do not apply. It’s also not a game show, presumably — or is it? what do the suitcases contain? are there airplanes involved? — although it is a “paid opportunity.” I guess you can email Ashton if you want to know more.

79 thoughts on “Not A Home Makeover Show”