This Saturday, I had the opportunity to listen to Arvind Kejriwal, founder of Parivartan, speak about his work on the Right to Information (RTI) Act of India. 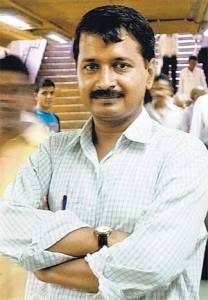 Arvind Kejriwal is an Indian social activist and crusader for greater transparency in Government. He was awarded Ramon Magsaysay Emergent Leadership award in 2006 for activating India’s Right to Information movement at grassroots and social activities to empower the poorest citizens to fight corruption by holding the government answerable to the people.

[He] devotes full time to his work as the founder-head of Parivartan – a Delhi based citizens’ movement trying to ensure a just, transparent and accountable governance… [Kejriwal] campaigned for the Right to Information Act, which was passed in 2005. In July 2006, he spearheaded an awareness campaign for RTI across India. [wiki]

p align=left>As we all know, the government agency bureaucracy in India is wrought with a culture of bribery and no real citizen accountability. The Right to Information Act has provides a way for Indian citizens to hold their government accountable, and has been doing so effectively.

p align=left>It was interesting to hear about the grassroots tactics around the RTI implementation Kejriwal used. This past July they ran a 15 day media campaign where they trained 1,500 volunteers and worked with 700 organizations across India. They worked with all of the major media outlets, and during that two week period 2,200 RTI reports were filled out. They coordinate with volunteers to stand outside of government agencies to inform citizens that if the agency tries to bribe them inside, to come return outside and receive help on filing an RTI report. They even have a blog to spread the word on RTI activities.

p align=left>As a citizen driven movement to hold the government accountable, it seems that it has been very effective in India. Kejriwal told many success RTI stories — there was the story of citizens demanding the 22 rupees minimum wage pay in Rajasthan; of Nannu the daily wage worker who had his lost food ration card replaced five days after filing a report; and of Sharma who waited six months for a passport, but received his passport within days of filing. But a quick glance through the successes of the program really lets you know just how successful this movement has been.

Check out Parivartan’s site for more information. It sounds like a great organization and a great citizen’s rights movement they are pushing for. There’s many things that we as desis in America can do to support this movement in India — NRIs can write a support letter to Indian politicians or RTI commission members; you can support with funding fellowships; promote awareness about India’s RTI here in the U.S. as well as with family in India; or even figure out how US-India policies reinforce not supporting the RTI Act and mobilize through that angle. Kejriwal is currently on tour in America telling his story – check with your local NET IMPACT to see if he will be coming through to speak near you.

24 thoughts on “Right to Information”