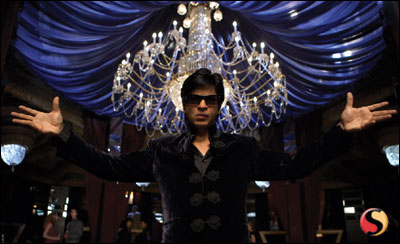 Actually, the new Shah Rukh Khan movie Don isn’t as bad as you might expect, given all the negative reviews (for instance). It’s also shaping up to be a box office success.

Farhan Akhtar is probably the most hyped director in the new wave of Bollywood film directors. Though he comes from an old B-wood family (his father Javed co-wrote the script of the original Don), Farhan’s first film, Dil Chahta Hai showed no signs of film dynasty nepotism. Dil Chahta Hai was considered a stylistic breakthrough because of the realistic (well, relatively) plot and its rebellious attitude, and it became an anthem of sorts for the post-liberalization generation. That sense of clarity or mission is missing here: in his remake of Don, Farhan devotes most of his writer-director energy into matching western action flicks, fight-for-fight, and stunt for stunt. On this he succeeds: I liked the first car chase, and I think the skydiving fight scene is probably a first for Bollywood. There is also a certain amount of Kill Bill theatrical viciousness here that’s novel in the Bollywood hero-villain iconography.

What most of the film’s critics have missed, I think, is the basic problem of identity this film symbolizes, a problem which is broader than just this film. Farhan Akhtar seems to be torn between two approaches: on the one hand, he could do a slightly tweaked version of an outdated version of India, from a “disco” gangster movie that wasn’t all that great to begin with. (Yes, I said it.) The upside is you get the warm-and-fuzzy nostalgia atmosphere, but the danger is the mindless perpetuation of the myth of the “glory days” of Bollywood and Amitabh Bachchan, as if we need any more of that. Or: he could make a slick, essentially imported style of action movie, with a few “traditional” songs added to appeal to the folks in UP (the “Mourya Re” and “Khaike Paan Banaraswala” numbers). This film flirts with both but doesn’t fully commit, which shows it fundamentally doesn’t know what it wants to be.

It may be a false choice, but the question continues to nag: will the real, contemporary Indian film aesthetic please stand up? Incidentally, Priyanka Chopra is good here — it’s really the first film where I’ve liked her. For one thing she gets to actually do some serious martial arts fighting, which is usually off-limits for Bollywood actresses. I also liked Boman Irani, as the cop who is after Don, and Arjun Rampal, who has a grudge against the Boman Irani character.

The remixes of old songs are so-so, and most of the new music is pretty bad (the exception being the Ganapati song, “Maurya Re,” and the track by the Midival Punditz). In terms of how the songs are filmed, I have to say I slightly prefer the current style of cheesecake exploitation (Kareena Kapoor) to the old version (Zeenat Aman Helen) — though both are pretty much ridiculous.

But the music for this remake was going to be impossible. How could anyone top the original disco-funk opening to Don 1978? (Maybe if you brought in The Neptunes or Dr. Dre you could top that, but otherwise I don’t see how it could be done.)

Amitabh’s entry in the original Don

A fight sequence from the original Don