Just over a week ago SM commenter DesiDancer returned from a trip to Colorado and emailed me the following about a wonderful experience she had there: 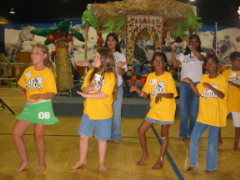 I was invited to come teach dance classes at the East Indian Heritage Camp, last weekend. The organization, Colorado Heritage Camps, Inc. offers a series of ethnic camps (Latin American, Chinese, Korean, Desi, etc) every summer, for adopted children and their parents. They draw on members of the ethnic community to volunteer and help engage the families in culturally-minded activities during a 4-day camp, up in the mountains. In addition to fun stuff, there are also panel discussion with several different age groups, dealing with cultural identity, issues that may affect adoptees and their parents, and several child psychologists contribute to the curriculum. In addition to the dance classes I taught, I sat on a panel for jr. high aged kids, discussing reclamation of culture, biculturalism, and other issues…

Over the course of 4 days, several of the activities included Ayurvedic medicine, traditional dance, Bollywood dance, Rangoli drawing, traditional vegetable painting/block printing, games like Cricket and Gilli-Danda, yoga, cooking classes, music lessons, and lectures on Indian holidays, Indian weddings, travel to India, Indian history–with a weird specialty class in Freedom Fighters, and a book group. We ate desi food, and every night was a party with desi music. The closing night of camp, all the little kids (and big kids) performed dances from their classes, and the parents in my adult class performed a dance for the families, too. I’d spoken to one of the Directors of the camp about getting a DVD of “Calcutta Calling” to screen at the camp, one evening, but I think she is going to arrange it for next year instead. Though she said she watched the video stream at PBS…They loved the documentary.

Some of you may recall the “Calcutta Calling” documentary we blogged about some time ago. In it several adopted Indian children who grew up in white families came together for the first time and took a trip to India. According to DesiDancer these camps might help to fill in some of the missing pieces for these mixed families by bringing them together with similar families:

Nobody was looking at the kids or the parents strangely, nobody had to explain, “yes, she IS my daughter” or any of the usual weirdness or unkindness that these families may encounter in their daily life. And all of the families are there because they support their child’s biological heritage and culture, and they want to include as much of it as they can, in their families, even if the parents don’t quite know how to go about it. This camp is a start in the right direction.

Sounds like they are always on the lookout for volunteers as well:

Year after year, children tell us that their counselor was the MOST important part of camp for them! Many of their parents agree! Our counselors are enthusiastic young adults, some adoptees themselves, some not, who have the same ethnic background as the adopted children at each camp. They participate in all of the camp workshops and activities with the kids, but MOST importantly, serve as positive role models for the children and families who attend camp. [Link]