We went over to the multiplex in Doylestown, PA yesterday to watch Vishal Bhardwaj’s Omkara on the big screen. It was nicely done — relatively crisp at two and a half hours (not bad for a faithful rendition of a Shakespeare tragedy), and unpretentiously shot in rural Uttar Pradesh. It was also well-acted by a group of talented actors — Ajay Devgan, Konkona Sen Sharma, Kareena Kapoor, Bipasha Basu, Viveik Oberoi (formerly known as “Vivek”), Saif Ali Khan, and Naseeruddin Shah. The standout performance is probably Saif Ali Khan’s Langda Tyagi (Iago), though I also thought Konkona Sen Sharma was quite good as Indu (Emilia). 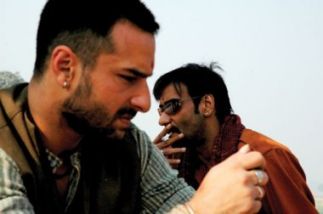 Omkara bears some similarities to R.G. Varma’s Sarkar in that it takes the gruff realism of modern Indian gangster pictures and applies it to politics rather than the criminal world — the point being, of course, that there isn’t that much difference between the two. While Varma’s Sarkar was an allegory for the Shiv Sena’s Bal Thackeray, the “Bhaisahib” in Omkara is a rural political chief, perhaps a Chief Minister like Bihar’s Lalu Prasad Yadav (formerly known as “Laloo”). In his home environment, he commands near absolute authority and devotion from his followers, though the legal system at the Center (commanded by “Auntyji,” possibly a figure for Sonia Gandhi) is constantly nibbling away at his fiefdom. In Omkara, Bhaisahib is in and out of court, and he relies on his faithful “General,” Omkara, to handle his equally corrupt political rivals — sometimes by exposing them (via MMS video sex scandals, no less), and sometimes by simply shooting them down.Omkara, like Othello, is not a comforting, uplifting story. Though this is easily one of the best Hindi films of the year in filmic terms, it’s unthinkable that it will be a popular favorite because it is thematically so dark. It may do well briefly in the urban centers, but I doubt it will succeed out in the smaller towns and countryside, even though the film is set there.

And the language of Omkara is something else — there are some extraordinary, even brilliant arrangements of Hindi expletives in the film (leave the kids at home!). Most of it comes out of the mouth of Saif Ali Khan’s “Langda Tyagi” (Iago), though some of the other characters are equally coarse. Of course, Shakepeare’s own Othello itself has some inspired moments of coarseness, mostly from Iago’s mouth. There’s the famous “beast with two backs” line, as well as passages like the following, where Iago is trying to alert Brabantio to the fact that his daughter has eloped with Othello:

‘Zounds, sir, you’re robb’d; for shame, put on your gown;
Your heart is burst, you have lost half your soul;
Even now, now, very now, an old black ram
Is topping your white ewe. Arise, arise;
Awake the snorting citizens with the bell,
Or else the devil will make a grandsire of you:

The way this is rendered in a rural, Uttar Pradesh dialect of Hindi in Omkara is pretty much unprintable in a family-friendly weblog.

Ajay Devgan is well cast as Omkara. He has the kind of glowering, brooding presence one expects of an Othello, though he isn’t visually marked as different. Instead of a racial other (the “Moor” of Venice), Bhardwaj marks Omkara as a “half-caste,” which is emphasized a great deal at the beginning of the film, only to drop out. Bhardwaj also makes “Iago” Omkara’s brother (I think) rather than his lieutenant, and gives Omkara a full, established household — whereas in Othello, the Moor stands absolutely alone.

In an Indian film that revolves centrally around the question of a woman’s fidelity, it’s hard to escape reference to Sita’s trials in the Ramayana. Thankfully, Bhardwaj is relatively restrained in his allusions to Agni-Pariksha. Still, it’s hard to escape the fact that Omkara, like Othello, is not a story where women get many good lines.

Political pseudo-pundit that I am, I would have liked more politics and more discussion of caste in Omkara, especially since we’re coming off an intense period of debate over caste-based reservations in the Indian education system. But Omkara is pretty well-balanced between these types of questions and the more intimate dynamics and word-play that also make Othello so riveting (“O, beware, my lord, of jealousy;/ It is the green-eyed monster which doth mock/ The meat it feeds on”).

And: reviews at Desipundit; Neha’s review

34 thoughts on ““Omkara,” “Othello,” and the Dirty Business of Politics (a film review)”