Things are deteriorating pretty rapidly in Lebanon with the latest horrible incident of civilian casualties:

The UN secretary general has called on Security Council members to take urgent action after 54 Lebanese civilians were killed in an Israeli attack on Sunday.

Kofi Annan asked council members to put aside differences and call for an immediate ceasefire, opposed by the US.

More than 30 children died in the Qana attack – the deadliest Israeli raid since hostilities began on 12 July when two Israeli soldiers were seized.

Israel is suspending air strikes for 48 hours, according to a US official. [Link]

Whatever tactical advantage Israel is hoping to gain with these airstrikes, it is losing strategic and diplomatic points by the day. The best way forward being discussed seems to be to a plan to deploy U.N. soldiers who are well-armed and provided with rules of engagement that would allow them to fight Hizbollah in order to control Lebanon’s southern border. Israel has said they would be okay with this as long as the U.N. soldiers would actively enforce instead of simply monitor. It is well known and openly derided that the U.N. has a very poor track record when it comes to enforcement duties. Nobody seems to want to put their soldiers into this hornet’s nest although they all agree that it’s a good idea in theory. Where do the U.N.’s Blue Helmets typically come from? It may surprise some of you: 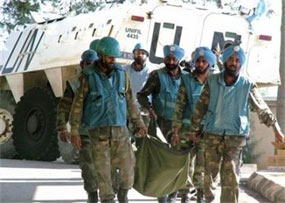 The UN Charter stipulates that to assist in maintaining peace and security around the world, all member states of the UN should make available to the Security Council necessary armed forces and facilities. Since 1948, close to 130 nations have contributed military and civilian police personnel to peace operations. While detailed records of all personnel who have served in peacekeeping missions since 1948 are not available, it is estimated that up to one million soldiers, police officers and civilians have served under the UN flag in the last 56 years. As of November 2005, 107 countries were contributing a total of more than 70,000 uniformed personnel–the highest number since 1995.

Despite the large number of contributors, the greatest burden continues to be borne by a core group of developing countries. The 10 main troop-contributing countries to UN peacekeeping operations as of February 2006 were Bangladesh (10,172), Pakistan (9,630), India (8,996), Jordan, Nepal, Ethiopia, Uruguay, Ghana, Nigeria and South Africa.

About 4.5% of the troops and civilian police deployed in UN peacekeeping missions come from the European Union and less than one per cent from the United States (USA). [Link]

Slate’s Explainer series lays out the required qualifications if you want to be an American Peacekeeper:

[Peacekeepers are] soldiers, police officers, and military observers from the United Nations’ member countries. Nations are expected to volunteer the members of their armed forces when asked–in general, the developing world does most of the volunteering. As of last month, Bangladesh, Pakistan, and India each had almost 10,000 troops in blue helmets, while American soldiers accounted for just 12…

Most of the Americans who take part in peacekeeping serve as civilian police officers rather than soldiers. (As of last month, 314 Americans were employed in such positions.) The State Department recruits volunteers for “CivPol” jobs through several private firms–DynCorp International, Civilian Police International, and PAE-HSC. These companies invite cops and recent ex-cops to apply online for yearlong stints overseas.

Aspiring peacekeepers must be U.S. citizens with five years of experience in professional law enforcement. (DynCorp won’t take anyone under the age of 26.) Eligible candidates must pass a physical agility test that includes the “low hurdle,” the “12-foot tunnel run,” the “dummy drag,” and the “ladder climb with shotgun.”

Those who make it through peacekeeper training get sent to the United Nations for international deployment. [Link]

p>Right now the U.N. soldiers are sitting ducks. A report earlier this week claimed that one of the four U.N. soldiers that died last week had previously reported that Hizbollah was launching rockets from almost on top of U.N. positions in order to trick the IDF into bombing these positions and killing U.N. soldiers. The Indian peacekeepers continue to be in harms way as well:

Two Indian UN peacekeepers were wounded yesterday when an Israeli airstrike hit near their border post in southern Lebanon, a spokesman said.

The two soldiers from the Indian battalion of the United Nations interim force in Lebanon were “moderately wounded as a result of the impact of an aerial bomb that hit in the vicinity” of their position in the border village of Adaisseh, UNIFIL Spokesman Milos Strugar said. [Link]

83 thoughts on “Are more blue helmets the answer?”