Because I can safely be described as a masochist, I am always on the lookout for masochistic stories with a desi angle. This one comes to us as a tip from former SM heartthrob Apul. It seems that there is a race that takes place in New York called the The 3100 Mile Race. Allow me to explain:

The Sri Chinmoy Marathon Team is proud to offer the Ninth Annual Self-Transcendence 3,100 Mile Race. In this grand test of endurance and survival, a small group of athletes attempt to negotiate 5649 laps of a .5488 of a mile course (883 meters) in the time-span of 51 days- an amazing challenge. This is the longest certified footrace in the world; runners must average 60.7 miles per day to finish within the 51-day limit. The serious athlete must have tremendous courage, physical stamina, concentration and the capacity to endure fatigue, boredom and minor injuries. The predecessor of this very race was the 2700 Mile Race (held in 1996), in which five intrepid runners finished the distance well within the 47-day time limit. In 1997, Sri Chinmoy, race founder, upped the distance to 3100 miles. Two runners finished the inaugural 3100 Mile race in less than 51 days, showing that athletes indeed believed in self-transcendence. Last year nine finished 3100 miles out of 12 starters… [Link]

There are two things that I find particularly interesting about this race. The first is that the founder, Sri Chinmoy, doesn’t appear to have the classic runner’s build. See for yourself:

Second, I found the “route” to be sort of mundane. Imagine circling the same city block repeatedly for 3100 miles! After some inquiries in dawned on me that this would also be a great route if you were a pedophile. What am I implying? Nothing. It was just an observation. 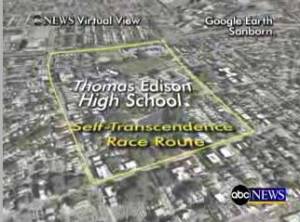 Don’t let the picture above fool you. Apparently Chinmoy was quite the stud in his youth:

Sri Chinmoy has been an avid sportsman since his youth. In the spiritual community where he grew up, he excelled in soccer and volleyball, and was the top-ranked sprinter. During his late teens he was also a decathlon champion.

In the 1970s and 1980s, he was an active long-distance runner, completing many marathons, ultra-marathons and shorter races. For many years he played tennis almost every day, and frequently competed in track-and-field events in Masters Games, including the World Masters Games in Puerto Rico in 1983, and the World Veterans Games in Miyazaki, Japan in 1993. He took up weight-lifting in the mid-1980s and over the years set several records in the calf-raise and one-arm lift. [Link]

ANY brown man that can overcome brown man’s disease (small calves) and go on to set a record in the calf-raise is a certified stud in my book.

I’ll be honest. Even though I like to think of myself as an athlete and it is well known that I dabble in transcendence from time to time, this is just too much for me. Luckily there are quicker ways to transcend. I personally prefer the 4 mile kind.

For those of you who are ready to learn the ways of the force you can download part 1 and part 2 of Chinmoy’s teachings. No word yet on whether there will be a Chinmoy Mission.

20 thoughts on “"…then you get tremendous joy"”