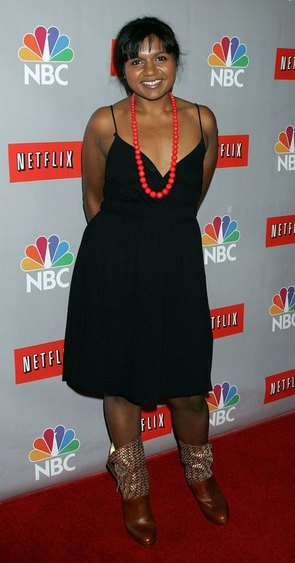 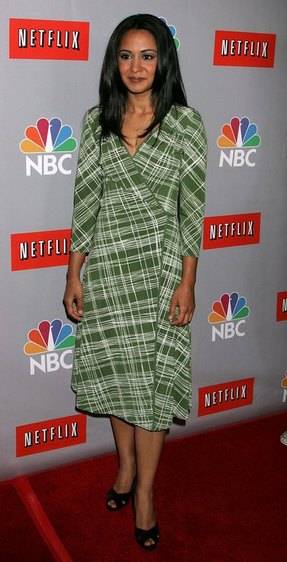 Via our news tab, mutineer Rupa alerts us to this week’s SECOND sepia fugging on the popular (and brutal) Go Fug Yourself blog. While I don’t necessarily agree with Heather’s review of pretty Parminder, I think the girls at GFY are usually spot-on with their wit and crit.

Rupa’s tip was about Mindy Kaling, someone whom I will admit I don’t know much about because she’s on NBC’s lesser version of The Office, a show I have never been able to sit through for an entire episode. No matter. The genius of GFY is its focus on the outfit. I don’t need to be an Office-fan to grasp THAT. Or not grasp it, as is the case here…what is up with those boots?

From the knees up, she looks adorable, all set for a divine NBC-Universal booze cruise of clenched-teeth joy, where every toast to their wonderful fall schedule comes with paranoia from Jeff Zucker that people will figure out they’ve swapped the costly champagne and top-shelf liquor with well booze and sparkling cider.

But her shoes are pure “local theater revival of Xanadu.” They look like she stapled wallpaper scraps to her ankles.

They actually look like chausses to me, but vatewer. Like expert Fugger Heather, I dig everything else she’s got going on, too. Her skin is glow-y, little black dresses are always money and the coral-red beads look great on her. But the boots…oy.

A few days ago, Brimful sent us the other GFY-related news item about Parminder Nagra getting fugged. In a delightful bit of connectivity, if you search SM for Mindy Kaling, Brimful’s comment about her here is one of two results you’ll find. If you can spin some sort of conspiracy theory out of that and the fact that both fuggees are on NBC shows, bring it.

On to Parminder, specifically what GFY had to say about HER threads, since Fugger Heather and I already agree on the following:

Which is why I wish heartily that she hadn’t gone and upholstered herself…Her body looks tense, as if she’s uncomfortable or uneasy in this confusing crosshatched fabric-store nightmare. I suspect it’s because no one expects the Spanish Inquisition — you have to maintain constant vigilence when you’re dressed as something resembling a Comfy Chair, because you risk being dragged unexpectedly into their brand of comfortable torture. From there it’s a short slide down to poking some old woman with the soft cushions and wondering, “How did this become my life?”

Owie. I don’t think she looks UPHOLSTERED, but I might be a little biased; I love green, plaid and wrap-dresses, so put Parminder Nagra in all of the above and I’m rather content. I know, it’s not her best look but if this is what “fugly” means…

frightfully ugly; of or pertaining to something beyond the boundaries of normal unattractiveness. Ex: “That ‘Kabbalists Do It Better’ trucker hat is fugly.”

…in that picture, she’s not fugly to me.

On a slightly related note, I was just looking at this post when I realized that neither of these accomplished actresses are the color of milky tea. They don’t have jewel-colored eyes, fair skin or blonde/auburn hair/highlights. In other words, they look like plain old desi me. That thought made me happy, after a lifetime of hearing “You’re so pretty for a dark girl,” while growing up in Northern California. I could tell you stories about my personal experiences with the entire “fairness-is-a-virtue” mindset which would dislodge your jaw, but I’ll save it for later.

After approximately three seconds of basking in the glow of these two, I realized that if we swapped the “H” for a “B”, they’d never make it in THAT version of the industry. Hollywood will use an actress which looks like me, Bollywood…won’t.