Of all of the potential 2008 presidential candidates on the Democratic side, Delaware Sen. Joe Biden has been in my top 5 (Gore, Warner, and Edwards being one through three). Biden always comes across as very articulate, often times blunt, and usually seems more knowledgeable about issues across the board than almost any other senator. The biggest dent in Biden’s armor (until today that is) has been the fact that he had Kavvya’ed someone during a previous presidential run:

Democratic presidential candidate Joseph R. Biden Jr., a U.S. senator from Delaware, was driven from the nomination battle after delivering, without attribution, passages from a speech by British Labor party leader Neil Kinnock. A barrage of subsidiary revelations by the press also contributed to Biden’s withdrawal: a serious plagiarism incident involving Biden during his law school years; the senator’s boastful exaggerations of his academic record at a New Hampshire campaign event; and the discovery of other quotations in Biden’s speeches pilfered from past Democratic politicians. [Link]

Today he may have topped that blemish, at least for a certain segment of the voters, by shoving his foot all the way up his mouth [via the News Tab]:

In fact, Biden said, “You cannot go into a Dunkin Donuts or a 7-Eleven unless you have a slight Indian accent…” [Link] 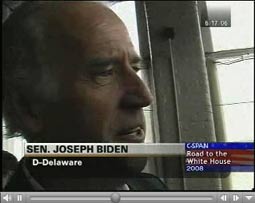 You will remember that another presidential hopeful, Hillary Clinton, made a similarly stupid remark in 2004.

Update: Please don’t start an email or letter writing campaign :). This may have just been a very poorly executed joke on Biden’s part.