There is only one thing of which I am a rabid fan and that is my home city, my ancestral homestead, New York New York. This is where my heart is (although I did leave a piece in San Francisco). 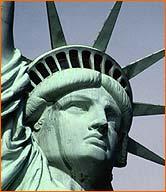 It is the place that I feel safest post 9/11, safest from both terrorists and violent bigots, despite the fact that both have been active there. What can I say? It’s home.

Not only is it home, but New York is what I think of when I think of America. In a freudian slip, the other day I said “when I’m in America next” when what I meant was “when I’m in New York next,” particularly ironic since I am currently based in the midwest. And why not? New York was America’s first campital and 40% of Americans are descended from at least one person who came through Ellis Island. Growing up, if somebody told me to “Go back where I came from” I would reply “After you!” We’re all immigrants here.

This is why these two news stories from this month have been sitting in my craw, and I’ve put off posting them. In the first week of June, Assemblyman Hikind introduced legislation that he had been promising for some time, legislation that would allow:

law enforcement officials to “consider race and ethnicity as one of many factors that could be used in identifying persons who can be initially stopped, questioned, frisked and/or searched.” [Link]

p>Hikind is very clear about who he wants stopped — brown people:

“The individuals involved look basically like this,” Dov Hikind (D-Brooklyn) said … brandishing a printout of the FBI’s most wanted terrorists – all with Arabic names, most with facial hair, some wearing turbans.

“Why should a policeman have to think twice before examining people of a particular group?” Hikind asked. “They all look a certain way.” [Link]

p>[Hikind’s website shows no reaction to recent accusation that seven black men may have plotted to blow up the Sears Tower, nor to the fact that half the London bombers were black, nor to various reports from the US government about SouthEastAsian plots.]

A federal judge in Brooklyn ruled yesterday that the government has wide latitude under immigration law to detain noncitizens on the basis of religion, race or national origin, and to hold them indefinitely without explanation. [Link]

broad discretion to enforce the law selectively against noncitizens of a particular religion, race or national origin, and to detain them indefinitely, for any unspecified reason, after an immigration judge had ordered them removed from the country.

“The executive is free to single out ‘nationals of a particular country’ and focus enforcement efforts on them,” the judge wrote. “This is, of course, an extraordinarily rough and overbroad sort of distinction of which, if applied to citizens, our courts would be highly suspicious.” [Link]

p>At this point, this is only a decision by a district judge, so it does not carry a lot of weight. However, it is significant in its scope:

David Cole, a law professor at Georgetown University and a co-counsel in the lawsuit, said the ruling was the only one of its kind and made New York “an equal protection-free zone” because the government can detain immigrants wherever it chooses.

“What this decision says is the next time there is a terror attack, the government is free to round up every Muslim immigrant in the U.S., based solely on their ethnic and religious identity, and hold them on immigration pretexts for as long as it desires,” [Link]

p>I hope your month has been going better than mine