Yet another in the everything comes from India (etymology) series. Have you ever noticed how desi college students all congregate around the punch bowl in the corner? 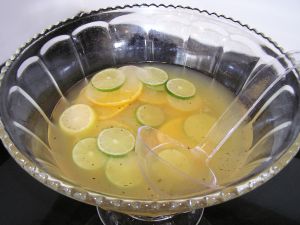 It’s not because they’re alcoholics too cheap to buy their own brew and too goody-goody to get a fake ID (well, maybe it is), it’s really because punch comes from India. In fact, it’s not really punch, it’s paanch [Thanks Sameer]:

Originally, the word punch was a loanword from Hindi. The original drink was made from five different ingredients, namely arrack, sugar, lemon, water, and tea. Because of this it was named panch which is the Hindi for five. This name was adopted by the sailors of the British East India Company and brought back to England, from where it was introduced into other European countries. [Link]

p>In Germany, they call it ‘Punsch‘ and it (of course) includes wine or liquor. And in Scandanavia the meaning has morphed yet further, losing the other ingredients to the point where it is just an arrack based booze. Surprisingly enough, the custom used to be to drink it with (what else?) daal:

The first ready-made punsch was sold in 1845 and initially the custom was to serve it warm, often together with yellow pea soup. [Link]

If the drink “punch” is an Indic loanword, then what about the action “punch”? Shouldn’t that be desi too? After all, it takes five fingers to make a fist in order to punch, and desis tend to throw punches after drinking too much of the same. And of course a “paunch” is what you get from drinking punch. Step aside, Noah Webster! We’re Indian givers and we want our loanwords back!