We Sepiaites recently had a facial hair contest down in the North Dakota bunker in honor of our one-year-and nine-month anniversary. Ennis and Amardeep went all uncley (‘you young pups’) and were excluded for obvious reasons. The womyn were granted compassionate dispensation. Vinod dropped out early, muttering something about ‘Malayalee genetics’ and ‘evolution into hairless geniuses.’ The rest of us sported five o’clock shadows by eight o’clock in the morning.

Siddhartha broke down under the strain of the face-off and admitted to having his back waxed this one night in Tijuana. Neha looked ready to leap in with war stories, but something in Anna’s look said ‘unh-unh, don’t go there, girlfriend.’ The legend of Cooch Behar is apparently not, repeat not about royalty.

Finally it was down to Sajit, Abhi, Fofatlal and me. Sajit flexed his square jaw thoughtfully and instantly sprouted whiskers. Abhi downed some freeze-dried astronaut food and grew a Mangal Pandey before our very eyes. Fofatlal misheard the goal of the contest. He had his eyebrows singed off with incense and honey and pranced around yodeling ‘Ya-hoo!’ like Shammi Kapoor.

I, having out-hirsuted the Greeks, out-grown the Sicilians, out-whiskered the Iranis, was now faced with my own private I-da-ho’: geek stubble from the Punjab was beaten by astronaut stubble from Houston. Abhi once bragged:

I haven’t met a person alive that has more lethal stubble than I. Any girl I might date would have friends thinking I was abusing her because her face would be left raw.

Unable to bear the shame, I went down to the SMU, passed out some endangered bananas and whispered a stoic farewell to my fine-furred friends. And then left the bunker for the last time, the pneumatic doors closing in the distance. Unlike Star Trek, they don’t say ‘shhhhhhhh’ when they close, they say ‘Desi please!’ with sass in the neck and quiver in the booty. Goddamn back-talkin’ bunker doors.

We’ve always thought of the Mutiny as a salon with a rotating cast of hosts. Nearly two years on, I’m proud of the neurocrack we’ve whipped up together. I’m proud of the rockin’ bloggers and readers we’ve managed to swindle rope in. And now I move on.

Please write the Mutineers if you know Movable Type or PHP and are willing to help out on occasion. And do come read me at Vij.com. The samosas and Maggi sauce are always kept aflame.

No rage, rage against the dying of the light. I go gentle into that good night. 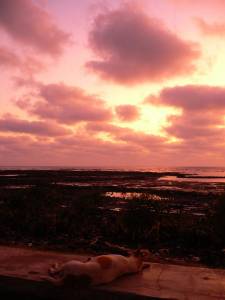 81 thoughts on “And thanks for all the fish”