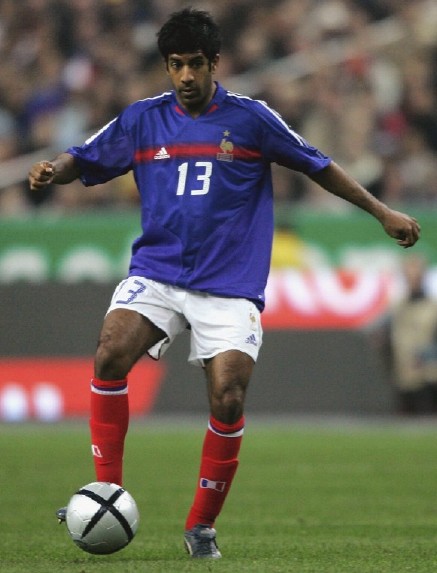 I donÂ’t know about you, but my attention next month will turn to Germany, host of this yearÂ’s football Â– yeah, yeah, soccer Â– World Cup. The 32-team tournament kicks off June 9 with Germany vs. Costa Rica; the final is a month later. To succeed Brazil as world champions, the bookies favor the Brazilians themselves, at 9/4. Argentina and Germany follow at 7/1. AsiaÂ’s four entries get little respect: Japan and Korea are at 150/1, Iran at 250/1, and should Saudi Arabia win it all, youÂ’d pocket 500 times your bet.

Oh. You were looking for a desi angle?

Well, there barely is one Â– no thanks to the South Asian teams, which lived down to their reputation as doormats in the Asia qualifying rounds. India got a 6-0 spanking from Japan and lost 5-1 to Oman. At least it had one win, against Singapore; the same cannot be said of Sri Lanka or the Maldives, which finished last in their groups. Pakistan didnÂ’t even make the group stage, falling by a total 6-0 in a playoff against Kyrgyzstan.

Yet despite this abysmal performance, you can be sure that TV screens across South Asia will be bursting with football. And fans seeking a tiny taste of sepia glory will be rooting at least in part for France, which fields the competitionÂ’s only desi. Standing a mighty 5Â’6Â” and weighing in at 140 lbs., midfielder Vikash Dhorasoo is our Great Brown Hope. As the photo shows, Vikash doesnÂ’t just have a desi body; heÂ’s also one desi-looking dude. In authentic desi fashion, he and his siblings alliterate: Vironi, Vipin, Vishna. The family come from Andhra Pradesh, by way of the sugar plantations of Mauritius. Vikash was born and raised in the unprepossessing French port of Le Havre. He played for the local club before finding glory at Bordeaux, Lyon (where he twice won the French championship), AC Milan, and currently Paris St.-Germain, for whom he scored the winning goal in this yearÂ’s French Cup final against arch-rivals Marseille.

Vikash is an interesting brother. He enjoyed math (of course) in high school and started university in economics before committing to professional football. Married with children, he leads a quiet life, dislikes television, listens to music. (Apparently Bloc Party are a recent fave.) HeÂ’s a sponsor of a Paris gay football league, which has earned him scorn from the more ignorant supporters. As a player, he uses his small size and low center of gravity to execute nimble, precise moves. An attacking midfielder, his main responsibility is quick runs and pure passes that set up goals.

Mauritian bulletin boards reveal some discontent toward their native son, supposedly for having disparaged the Mauritius national team, and certainly because he chose to play for France rather than the island. (Mauritius, incidentally, narrowly missed pulling off a major upset in its playoff against Uganda for a spot in the African qualifying rounds, losing 3-0 in Kampala but winning 3-1 at Curepipe, for a heartbreaking tally of 4-3.) No such qualms in the Indian press (thanks, tipster 3rd Eye). In any event: Bonne chance, mon frÃ¨re Vikash; allez, allez, allez!

96 thoughts on “The Great Brown Hope”