My friend (and fellow Michigan Alum) Sharat Raju will have his short film American Made featured on PBS stations across the nation next week. The film, originally shown beginning in 2003 at various film festivals (including Artwallah while I was serving on the film committee), features a Sikh family on the side of a desert road trying to get their broken down car running again.

American Made began with a trip through the desert by writer/director Sharat Raju. While driving along Highway 14 north of Los Angeles, he noticed a car pulled over on the side of the desert road and began to wonder what would happen if no one stopped to help. What if there was someone who looked suspicious? What if it was a family who looked foreign, not American? What does an “American” look like? This internal debate was the seed for American Made, and Raju easily found real-world examples of the xenophobia that swept through the country in late 2001. His Indian-born parents, although having lived in the United States longer than they lived anywhere else, suddenly felt like outsiders in their own home. Although they were American, being “American” now seemed to mean something different, something less inclusive than it had been. This feeling of alienation was not exclusive to a single race or group. One community in particular felt this change in the social climate perhaps the most — the Sikh religion in America. [Link] 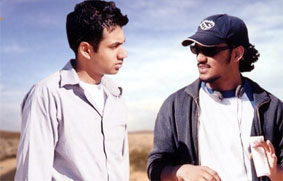 Kal Penn (credited as Kalpen Modi for this film even though he was already going by Kal Penn) has a supporting role in the film where his character spends most of the time trying to get his cell phone to work. PBS has been good at featuring stories about South Asians on its nationwide networks. This film is being shown starting on May 9th as part of Independent Lens program. In addition, you can find a slew of South Asian related films on the PBS Frontline page. Hell, last month a PBS show even had me in it (yes, that was an absolutely shameless plug

In any case, I hope SM readers get a chance to check out this film next week. Sharat is also the director and co-producer of the movie Divided We Fall which we have covered before.

67 thoughts on “American Made”