The FBI’s king techie, Zalmai Azmi, is an Afghani-American who got the job after gigs as an auto mechanic, military intelligence in the Marines, the DoJ and the Patent and Trademarks Office: 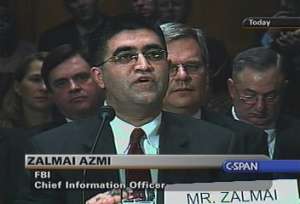 Zalmai Azmi is CIO of the FBI. He was born in Afghanistan, but emigrated to Germany with his family as a teenager in the early 1980s… He attended a vocational business school, which helped him find a job as an auto mechanic. Azmi joined the Marines in 1984, working in the IT-intensive areas of radio communications and military intelligence. He served for seven years. [Link]

p>Azmi talks about how people looked at him differently after 9/11:

Have you found your Afghan background to be a deterrent or a problem in any way?‘They were showing pictures of the terrorists on TV and they looked something like me’

… I’ve probably experienced that kind of problem less than five times since I’ve been here.

One of the toughest times was just after 9/11. I put a taskforce together to go to New York and help get our offices there back on line. I spent ten days there, and all the time they were showing pictures of the terrorists on TV and they looked something like me. My face was a constant reminder.

That was probably the only time I noticed that people were looking at me differently, and fortunately it didn’t last long. [Link]

Azmi is currently wrestling with the FBI’s complete inability to send email or do simple document searches (thanks, Ennis):The FBI claims it can’t afford to provide e-mail addresses for some of its employees

Two weeks ago, the FBI’s chief information officer admitted that the bureau couldn’t afford to provide e-mail addresses for 8,000 of its 30,000 employees…. agents can’t point and click to add a record to their digital files. Instead, they have to tab through 12 different functions on a pre-Windows-era green screen. Pictures of suspects can’t be scanned in. And complex searches are impossible–don’t bother looking for “aviation” and “schools” at the same time. Many agents stay away from Automated Case Support and stick with paper. The 100,000 tips that came in during 2002′s Washington, D.C., sniper case were circulated by fax. [Link]

A fix is on the horizon:

Azmi recently signed a $425 million deal with Lockheed Martin to develop Sentinel, the software the Virtual Case File never grew to be. The company has four years to deliver, not 22 months. The software will rely on commercial components, like Oracle databases, and it will be rolled out in increments rather than a single chunk. [Link]

Every time I hear of someone like Azmi or Gen. John Abizaid, an Arab-American involved in running the Iraq war, I’m reminded of one of the greatest things about being an American: that you can become one, truly, madly, deeply.

44 thoughts on “The Keymaster”