In the basement of our North Dakota headquarters we employ a small but elite team or researchers designated the “SMU.” Their sole job is to predict “the next big thing,” and they are rarely wrong. You see, our marketing department has indicated that based on focus group feedback, readers that visit our site will flock to other blogs the minute we fall behind on what’s happening in the world around us. They will leave us the minute we aren’t ahead of the curve on “what’s cool.” Therefore, whenever the SMU staff starts “rattling their cages,” they know they will have my full attention. I predict that the next big thing (and you are hearing it on our blog first) is…Camel Milk: 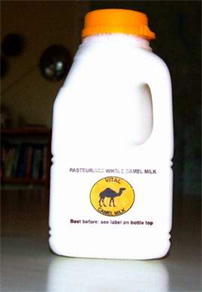 While slightly saltier than cow’s milk, camel milk is highly nutritious. Designed after all for animals that live in some of the roughest environments, it is three times as rich in Vitamin C as cow’s milk.

In Russia, Kazakhstan and India doctors often prescribe it to convalescing patients. Aside from Vitamin C, it is known to be rich in iron, unsaturated fatty acids and B vitamins.

Tapping the market for camel milk, however, involves resolving a series of humps in production, manufacturing and marketing. One problem lies in the milk itself, which has so far not proved to be compatible with the UHT (Ultra High Temperature) treatment needed to make it long lasting.

But the main challenge stems from the fact that the producers involved are, overwhelmingly, nomads.

Another problem, according to the FAO, is the nature of the animal itself. Camels can reputedly be pretty stubborn. And unlike cows, which store all their milk in their udders, camels keep theirs further up their bodies. [Link]

p>Now I know that some of you might not like milk of any kind. Some people just don’t. My mom for example never drinks milk. But what about chocolate? Everybody likes chocolate…

India would be smart to make this a major export. They have the raw talent for it:

There are three major breeds of Camel in India viz. Bikaneri, Jaisalmeri and Kutchi.

The Bikaneri has excellent draft capabilities and is therefore becoming the breed of choice of the farmers of the Thar desert (NW Rajasthan).

The Jaisalmeri camel has good race potential and therefore was important breed before advent of modern camel cart. They were preferred in cavalries in the past life Ganga Risala which took part in World War I and II. Presently the Camel Corps constitutes an important wing of the Border Security Force of Indian para-military service.

Anyways, I just wanted to put this out there as my hot tip of the week. Tell your friends. We are still cool.

17 thoughts on “Get you love drunk off my hump”