Much like I have a crush on the boys of Karmacy, Ebrahim, the kids at Beta Project, I now have a crush on the boys over at The Kominas. What can I say, i’m a sucker for the Alterna-Desi types. The Kominas were mentioned earlier this month on Sepia Mutiny as one of the handful of desi punkers that exist here in America. The Boston based trio of Muslim punks rock out with halal music, and songs titles of “Dishoom, Baby” or “Sharia Law in the USA.” The band, consisting of Basim Usmani, Shahjehan Khan, and Adam Brierly, are quickly heading to the top of ‘bands to watch,’and even have a quirky bit on MTV.

The Kominas, whose name means ”bastards” in Punjabi, say they hate labels but offer ”Bollywood Muslim punk” to describe their sound, a blend of punk, metal, and Bhangra folk music. The lyrics, written mainly by Usmani, are clever, sometimes risque commentaries on racial profiling, foreign policy, and religion…

Their music has attracted fans of all stripes but speaks to young South Asian Muslims who identify with both their faith and American culture, and yet feel welcomed by neither. They’re fed up with racist classmates, judgmental relatives, suspicious neighbors, and the extremists — Islamic and Islamophobic — who have made it a burden to be Muslim in the United States. But thanks to online communities and sites like MySpace, where they post songs and have attracted a substantial following, they now have a pulpit, too. [link]

The band has it’s roots in The Taqwacores, an alterna muslim punk novel that muslim convert Michael Muhammad Knight wrote and sold out of his backpack, until it was recently picked up for publication.

The Taqwacores,” a novel about a group of Muslim punk rockers who smoked dope, read scripture, slam-danced, prayed, had sex, and embodied the tolerance and compassion that Islam encouraged but that, in Knight’s view, were being neglected in favor of rules and rigidity…”The Taqwacores” was ultimately picked up for distribution by Alternative Tentacles, the publisher and music label owned by former Dead Kennedys vocalist Jello Biafra.[link]

I was reading excerpts of The Taqwacores and I have to admit, it’s nothing like what they taught us in the mosque youth group when I was growing up. Muslim youth are raised with a very orthodox set of rules, creating this weird contradiction when living your life in a Western society. But as one who has performed pilgrimage in Mecca as well as one who has jumped around in mosh pits, I find the Taqwacore genre and subsequent movement able to intersect religion and counter culture in a progressive way – similar to the Christian rock movement. 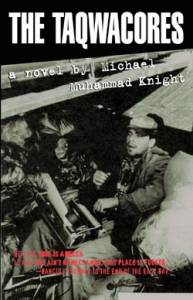 On Fridays the living room doubled as a masjid, mostly for kids from the campus who couldn’t identify with the MSA. They were nowhere near being ersatz mumins of Fasiq’s level, but you still had girls who didn’t cover their hair, guys who went to clubs down on Chippewa and so forth. Our house with its punk posters and vandalized Saudi flag was the closest thing they had to a comfortable Islamic experience in which they could pray and embrace their culture without having to feel inadequate.[link]

The Kominas are not the only ‘Taqwacore band’ out there. There’s Gilbert Switzer that reminds me of hardcore basement DC shows, with a bad ass desi chick guitarist. There’s also the DC-based Fugazi sounding Diacritical and out of San Antonio, the self-proclaimed Taqwacore band Vote Hezbollah. Much in how the roots of punk music have a message, all of these songs have a message too, but in addition to creating a space for angst-y rebellion they are giving a space for political and religious unity as well.

If in the Boston area, The Kominas have a couple of upcoming shows. I would like to know what some mutineers think of how this band is live. As for my crush, looks like I may have to duke it out with TMBGITW. In a wet sari.

Apparently the East-meets-punk-meets-heavy-metal sound is working for the guys, at least on the romance front. “[It’s] like the type of music that Madhuri Dixit would want to marry you for,” jokes Usmani. “Aishwarya Rai ran towards me yesterday in a wet sari.” Ladies, watch out. The Kominas are working on their first EP, to be released later this year. [link]