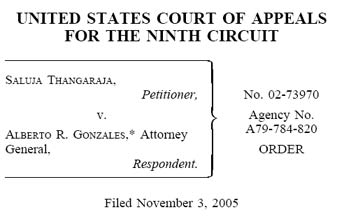 Sri Lankans Saluja Thangaraja, who is now 26, and Ahilan Nadarajah have been sitting in a U.S. Federal pen for 4 years now. Why? They are victims in a sense of the politics that resulted from 9/11. The SJ Mercury news picks this off the AP wire:

A Sri Lankan woman fleeing persecution in her native country has been released after spending more than four years in federal detention on allegations that she entered the country illegally.

Saluja Thangaraja, 26, was freed from the Otay Mesa detention center late Monday after the San Francisco-based 9th U.S. Circuit Court of Appeals ordered the release of a Sri Lankan man who also spent more than four years in the same facility.

The court ordered the release of Ahilan Nadarajah on March 17, saying the government was violating federal law by holding him even though he wasn’t criminally charged and couldn’t be deported in the foreseeable future.

Nadarajah and Thangaraja both fled Sri Lanka and stopped at the U.S.-Mexico border in October 2001 and were charged with being in the U.S. without a valid visa. Both were granted political asylum but the government refused to release them.

In case you are keeping score at home, this is yet another example of the Executive Branch selectively ignoring the power of the Judicial Branch in the name of “protecting” Americans. The fact that these two were stopped at the Mexican border may have incentivized the government to over-prosecute this case so as to justify their specious arguments connecting illegal immigration on the Mexican border to terrorism. Thangaraja and Nadarajah were kept in jail while the original ruling was appealed by the government. As you have probably already guessed, the U.S. government insisted these two were LTTE terrorists despite evidence to the contrary.

The Sri Lankan army had suspected each of being a member of the Liberation Tigers of Tamil Eelam, a separatist group listed as a terrorist organization by the U.S. State Department. The U.S. government alleged Nadarajah was a Tiger member, but did not make that claim against Thangaraja.

In August 2004, the 9th U.S. Circuit Court of Appeals concluded that Thangaraja’s testimony about being abducted, beaten and tortured by government forces in Sri Lanka was credible and ruled that she couldn’t be returned to the South Asian country because her life would be in jeopardy. Last June, an immigration judge granted asylum, but the government kept her in jail while it appealed her case, Thangaraja’s attorney said.

“She did nothing wrong; she just came to this country seeking asylum from persecution,” said Ranjana Natarajan, a lawyer with the American Civil Liberties Union of Southern California.

Although it isn’t mentioned in the article, these two were probably held by exploiting the material witness statute that I have previously blogged about [1,2]. While the government contemplates their next move, the two are finally free and staying with members of the Sri Lankan community near L.A.

6 thoughts on “When asylum might not be a good thing”