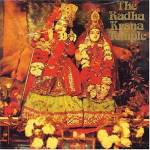 Check out this video of an Armenian ice dancing couple performing to a Hare Krishna bhajan in Torino (thanks, Masked Tipster). 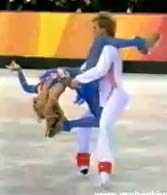 I don’t think the Blue One looked quite like this. Nothing says religion to me like than a half-naked dancer hanging upside down off a man’s shoulders flashing mudras

‘Sex sells,’ said American Jamie Silverstein, 22, referring to itty-bitty costumes… Anastasia Grebenkina of Armenia wore a backless outfit except for a small swath of cloth that covered her bottom. [Link] 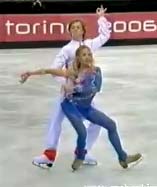 For the dance enthusiast, an ice dancing performance is like a five-minute clip of “Strictly Ballroom” – on acid. Incredible holds, tight twizzles and … hydroblading? Hell yes.

For the chick-flick fan, ice dancing is all the drama without the shitty, sub-par dialogue. When Italian pair Barbara Fusar-Poli and Maurizio Margaglio stumbled into a heap of sheer, neon Lycra, they stood on the ice for almost a minute, shooting each other the classic “f– you and your sequined appliquÃ©s” look. They didn’t speak for more than 24 hours after. “Beaches,” “Hitch” and “My Best Friend’s Wedding” don’t have a blade to stand on.

p>Grebenkina and Vazgen Azrojan didn’t medal with this acrobatic routine. But with only four competitors from India, two from Pakistan and one from Nepal, sadly, it actually increased the Olympics’ sepia quotient.

Armenian Ice Skaters/Dancers performing to the chorus of the Govinda prayers as recorded on The Radha Krsna Temple album… produced by George Harrison… Notice the flowers and bindi and ever so vaguely semi-classical poses. This portion includes prayers, purportedly from Lord Brahma, addressed to Govinda…

When… Swami Prabhupad came to the United States… he made a disciple who took the name Yamuna Devi. 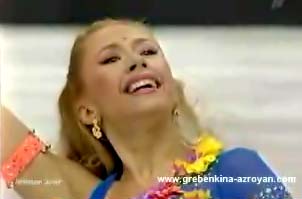 She and some compatriots went to the United Kingdom… managed to get themselves… invited to Apple Studios, and that’s how George Harrison got into the Hare Krishnas. I believe [Harrison is] playing the guitar in that plucky, vaguely-sitar like way on the recording. Yamuna Devi is doing the main singing.

This recording is played every morning at almost all ISKCON temples, around 7 am… [via tip]

Related posts: If not Torino, then where?