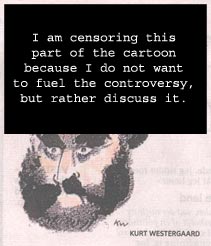 Here at SM headquarters we have quite an intricate system for vetting which stories make it to our website. Most of our stories are unearthed by the army of ex test-monkeys (retired from military, space, and medical research) that we house in our basement. They are the ones who scour the internet all day and feed important stories to our bloggers, while we spend most of our time at our full-time jobs. We also have the tipline, by which dedicated readers send in tips. Later, in our conference room, we ask ourselves three main questions about a prospective post:

The reason you haven’t seen us post on this topic before is because not all of us were convinced that we could answer yes to all three questions. After attending the SAAN Conference this past weekend (which will be summarized in my next post), I have become convinced that we have missed the relevance this issue has to our community, and that the answer to all three questions is yes. I am speaking of course of the controversy surrounding a Danish newspaper’s decision to publish a picture of the Prophet Muhammad with a bomb as his turban.

Arab foreign ministers have condemned the Danish government for failing to act against a newspaper that published cartoons of the Prophet Muhammad.
At the Arab League conference in Cairo, they said they were “surprised and discontented at the response”.

Islam forbids any depiction of Muhammad or of Allah.

The Jyllands-Posten newspaper published a series of 12 cartoons showing Muhammad, in one of which he appeared to have a bomb in his turban. [Link]

p>I see great irony in this situation that doesn’t seem to have registered in the press (as far as I know). Muslims around the world are protesting this cartoon (often violently) because it is forbidden in Islam to depict the Prophet, especially in such a vulgar manner as this. Muhammad, in his boundless wisdom, wanted to make sure that his image would never be used or treated as an idol, and that men would never worship him as one. In Christianity for example, many most sects now worship Christ as God, instead of seeing him as only a mortal prophet. It was the message of Islam, and not Muhammad the man, that was to better the world. By violently protesting this cartoon, it could be argued that Muslims around the world are acting as if an idol has been desecrated. Using violence to protest this “desecration” legitimizes that which the Prophet cautioned against in the first place. He has become an idol to be defended and avenged in the eyes of many. Part of the reason that we haven’t already written about this issue is that it hasn’t had nearly as much impact in the U.S. as it has had in Europe and the rest of the world. Do Americans even care or understand what this is all about? Why am I not hearing more about this from the desi community? Before I go on, I want you to take a careful look at some pictures. Don’t read text that follows the pictures until you guess which country each was taken in:

Give up? 1) London, 2) New Delhi, 3) Philadelphia, 4) Tehran
It’s almost funny to see the signs held up by protesters in Philly, as compared to the blood-thirsty mobs portrayed in the rest of the pictures. “No to hate” and “Distasteful,” vs. “Behead those who insult Islam” and flag burning.

Muslims offended by the [Philadelphia] Inquirer’s decision to reprint a caricature of the Prophet Muhammad that has inflamed the sensibilities of their co-religionists across the world picketed the newspaper this morning…
Most American newspapers have decided not to reprint the cartoon. Newspapers in Europe have, as a gesture of free press solidarity with Jyllands-Posten, run the caricature as well as 11 others pillorying the prophet. One image depicts Muhammad halting a line of suicide bombers at the gates of heaven with the cry, “Stop, stop, we have run out of virgins…”
One demonstrator, 54-year old Aneesha Uqdah of Philadelphia, argued that precedent exists for newspapers to withhold some information to prevent harm: “If a woman was a rape victim, you wouldn’t publish her name,” she said…
The demonstrators carried signs that read, “Freedom of Speech, Not Irresponsible Speech,” “No to Hate” and “Islam = Nonviolence…” [Link]

How can you, as an average American citizen, not agree with the level-headed logic of the woman in the quote above? Common sense alone would convince most Americans that the cartoon is inappropriate, partly because there is nothing American’s admire more than peaceful protestors willing to risk jail and personal injury for a cause which they believe is just. Such truth and justice is infectious. The civil rights movement was based on such Gandhian principles, which were adopted by Dr. King. Most South Asians in America have adopted this ideal ideal as well. No matter how much Muslims in America, including South Asian Muslims, disagree with this cartoon, I cannot imagine them violently protesting it like in Europe and around the world. Almost every non-white American has experienced racism or intolerance in their lives. The way we deal with it is the polar opposite of other minority populations around the world. We fight every bit as hard as those elsewhere, but our battles are guided by the belief that America can be changed by its own citizens for the better. We don’t instinctively burn flags or cry out for blood. We get angry, we get focused, and then we work for our cause. By contrast, look at this nutjob in London. He felt that he could make his displeasure for a Danish cartoon known…by dressing up as a suicide bomber. He not only hurts his cause, but he endangers (through stigma and suspicion) the lives of all those he thinks he is defending: 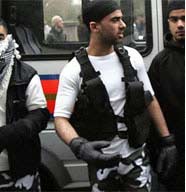 Speaking outside his home in Bedford, Mr Khayam, 22, said: “I found the pictures deeply offensive as a Muslim and I felt the Danish newspaper had been provocative and controversial, deeply offensive and insensitive.
“But by me dressing the way I did, I did just that, exactly the same as the Danish newspaper, if not worse. My method of protest has offended many people, especially the families of the victims of the July bombings. This was not my intention.”

Downing Street today described the behaviour of some Muslim demonstrators in London over the last few days as “completely unacceptable”. Some demonstrators carried placards calling for people who insult Islam to be killed. [Link]

Fareed Zakaria writes in the latest Newsweek about how the Bush Administration may have misjudged their ability to affect change in the Islamic world:

There is a tension in the Islamic world between the desire for democracy and a respect for liberty. (It is a tension that once raged in the West and still exists in pockets today.) This is most apparent in the ongoing fury over the publication of cartoons of the Prophet Muhammad in a small Danish newspaper. The cartoons were offensive and needlessly provocative. Had the paper published racist caricatures of other peoples or religions, it would also have been roundly condemned and perhaps boycotted. But the cartoonist and editors would not have feared for their lives. It is the violence of the response in some parts of the Muslim world that suggests a rejection of the ideas of tolerance and freedom of expression that are at the heart of modern Western societies. [Link]

So where do I stand on this issue. After much thought I decided that I must stick to the principles I believe in as an American, most importantly the freedom of speech. Freedom means the right to publish hate-speech, as long as it doesn’t incite violence against someone. In this case, the newspaper has apparently incited violence against itself. You should not have to fear for your life, or the lives of your countrymen abroad, simply for drawing a picture. I am not being a hypocrite or inconsistent with past beliefs. I also support the right to place Ganesh on a beer bottle, and Rama on shoes, or any other “blasphemy” you can think of. I may protest things that offend me, but never through violence. This behavior you see around the world is not Islam. It would seem that many Muslims have just decided to turn their backs on the teachings of the Prophet and return to the pre-Islamic roots of some of their cultures. Especially under poor socio-economic conditions, a false sense of justice, blood feuds, intolerance, and tribalism has taken over. These pre-Islamic norms are what must be protested.

There are about a dozen other angles to this story that I am going to leave for the readers. I caution however that we need to keep this dialog constructive going forward. I will be moderating the comments a lot more closely, so please keep it clean and flame free.

243 thoughts on “The Danish cartoon controversy: A contrast in protests”