Here’s yet another Russell Peters comedy clip. A thinner Peters makes an appearance on the Beeb and does a shout-out to Meera Syal, who’s sitting in the front row.

Way back in 1933, Devika Rani shocked people with her lingering kiss with Himanshu Rai in Karma. [Link]

… [Dimple Kapadia] created as big a splash with her comeback in Saagar when she flashed her exposed breasts to the camera for a few quick frames… a shocking first for a mainstream actress in a Bollywood film. [Link]

Mrs. Kapadia presents! This gallery of kisses through Bollywood history is way too rrro-man-tik to be saved for V Day. 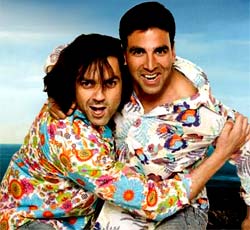 Bobby Deol and Akshay Kumar gaze deeply into each other’s eyes, vowing eternal love and loyalty… on motorcycles. They were trying for ‘Yeh Dosti’ from Sholay, with Deol as the younger Dharmendra. What they got instead was Brokeback Hillstation. A film culture which only mentions gays when ridiculing them, affords lots of room for hot hetero phrendship.

21 thoughts on “Beebful of Russell”